The New York City Ballet Orchestra returns to the recording studio for the first time in almost a decade with compositions to which George Balanchine created four of his best-known ballets—The Four Temperaments, Agon, Jewels, and Serenade—featuring music by Hindemith, Stravinsky, Fauré, and Tchaikovsky.

A Balanchine Album marks the return to the recording studio of the New York City Ballet Orchestra—under the direction of Robert Irving—for the first time in almost a decade. The record consists of compositions to which Balanchine created four of his best-known ballets: Paul Hindemith’s Theme with Four Variations [According to the Four Temperaments] (The Four Temperaments, 1946), Igor Stravinsky’s Agon (Agon, 1957), music from Gabriel Fauré’s Pelléas et Mélisande and Shylock (“Emeralds” from Jewels, 1967), and Peter Ilyich Tchaikovsky’s Serenade for Strings (Serenade, 1935). The first two pieces were commissioned: the Hindemith by Balanchine himself and the Stravinsky by Balanchine and Lincoln Kirstein.

The scores for Serenade and Emeralds were specially arranged by Balanchine and have never before been recorded exactly as they are heard when these ballets are performed. Serenade was originally created to only the first three movements of Tchaikovsky’s composition; in 1940, Balanchine added the Russian Dance choreographed to the music’s fourth movement but placed it third in the ballet—in between the Waltz and the Elegy. It has been performed this way in all subsequent stagings. The music for Emeralds has been slightly altered since the ballet’s premiere—a new pas de deux and pas de sept choreographed in 1976 required additional music—and appears on the record as arranged by Balanchine.

MP3s for this album are available worldwide; CDs of the album are not currently in print. 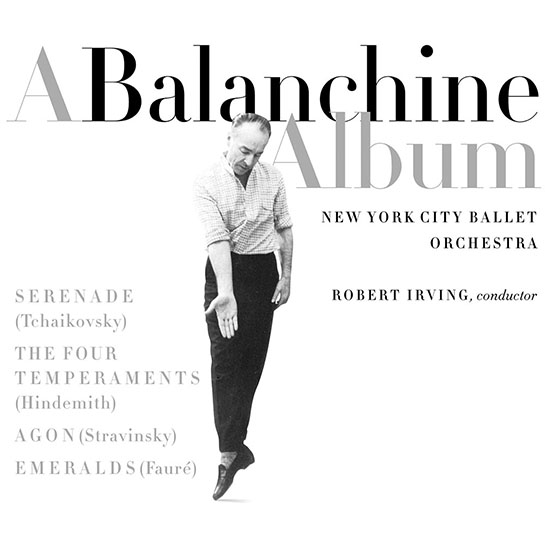