On this 2006 set, inspired by travel to China, Garret searches “for common ground between avant-garde jazz and traditional Asian music,” says the Washington Post, producing “one of the year’s best albums.” Garrett collaborates brilliantly with alto saxophonist Pharoah Sanders on several tracks.

Kenny Garrett is “one of the more imposing musicians of his generation," writes the New York Times. "[His] solos give the audience the sense of experiencing a natural event, of power and elegance in the form of music."

“The people of China were so mysterious to me because they are so isolated,” Garrett shares. “I have read books on Chinese philosophy and intuitively felt that there is something in the culture for me. There is simplicity to Confucianism that I love ... how they function by nature and how something as simple as raking the leaves can put you in tune with the universe.”

Naturally, Garrett’s interest also turned to music. “Preparing this CD,” he continues, “I was initially trying to make a connection between Africa and China. I was comparing books on their approaches to health and saw a lot of similarities. I wondered if I could connect the spiritual aspects of Africa and China in music. I’d written the song ‘Beyond the Wall’ a few years before. I always dreamt of going to mainland China. So I wrote a song about the wall to inspire me to get there ... like writing out my plan. And this album is the result.”

For Garrett, Beyond the Wall is a continuation of his fascination with and study of Asian cultures and philosophies. Garrett is already a fluent Japanese speaker—he dedicated “Kitura Sensei” from his acclaimed 2003 Warner Bros. disc Standard of Language, to his teacher—and in the recent past he has explored Japanese and Korean themes in live performances.

On Beyond the Wall Garrett mixed Chinese instrumentation with Western strings, creating an amalgam of musical styles, which hang together effortlessly. Some of the tracks on Beyond the Wall relate specifically to his travels: the opening cut “Calling,” which serves as a sort of overture, represents Garrett’s desire to explore the culture, music, and customs of China; “Qing Wen” reflects his initial feelings of being an outsider in a place he’s yearning to understand. “‘Qing Wen’ [pronounced chin-win] means ‘May I,’” Garrett explains, “but there’s a more spiritual meaning that I haven’t been able to articulate yet.  The simple act putting those words into a two-note melody affects their meaning. You can feel it.” “Gworka” is a cross-cultural experiment, which adapts a slavery-era call-and-response cadence from Guadeloupe. “The foundation is African,” says Garrett, “but any time you’re dealing with the Pentatonic scale, you’re dealing with the Chinese overtone.”

Other songs on Beyond the Wall include “Realization (Marching Towards the Light),” on which Kenny sampled the Tibetan Monk chant “TKTK” from Tibet: The Heart of Dharma, and “Gwoka,” which co-opts a slavery-era call and response cadence from Guadeloupe. “Tsunami Song” features the expanded ensemble with harp, violin, cello, percussion, and erhu.

Though Garrett has been gigging with Sanders for some time, Beyond the Wall marks the first time they’ve worked together in the studio. Says Garrett, “I speak to Pharoah on a regular basis and we are friends, but I still remind myself that his friendship is a blessing. Pharoah stood on the bandstand with John Coltrane. There’s a lot of history in his playing that I try to absorb...a lot of things he does on his horn that are very earthy. Our playing styles are similar because we come from the same elements and go to the same places. It’s a place you can’t just get to automatically. It’s a feeling.”

“He reminds me of Coltrane,” Sanders says, offering Garrett perhaps the ultimate compliment. “Whenever we play together, what he’s doing is very unique from what I’m doing. It’s a contrast that lets you know that person is thinking very spiritually. He’s not like a person getting in tune with a piano. He’s more in tune with the earth. He has a very rich sound with a lot of depth and bottom...like he’s playing with his guts rather than his diaphragm.”

Garrett first played with Hutcherson on the vibe and marimba master’s 1999 Skyline. He then composed “Conversations with Hutcherson” for his own album from the same year, Simply Said, and later invited Hutcherson to perform with him on his 2002 Happy People disc. Beyond the Wall was also a reunion of sorts for Hutcherson and Sanders; it had been 25 years since they’d officially recorded together on Sanders’ 1981 double LP, Rejoice. “Bobby and Pharoah are my heroes,” Garrett confesses. “I put them together so I could be right in the middle!

Detroit native Garrett had been introduced to the saxophone early on by his father, who played tenor. In 1978, while still in his teens, Garrett joined the Duke Ellington Orchestra, under the direction of Ellington’s son Mercer. Three years later, Garrett moved to New York City and played with The Mel Lewis Orchestra (learning the charts of Thad Jones) and the Dannie Richmond Quartet (playing the music of Charles Mingus). He cut his first album as a leader, Introducing Kenny Garrett, in 1984 for the Criss Cross label, and also recorded with Freddie Hubbard and Woody Shaw. Jazz fans around the world became familiar with Garrett through his live and recorded work in Miles Davis’s latter-day band, from 1986 through 1991.

Before moving to Nonesuch, Garrett cut eight discs for Warner Bros, many of which reached the Top Ten of Billboard’s Jazz Album chart. He’s attracted a remarkably wide-ranging audience outside of the strictly jazz world through his collaborations with such fellow artists as rapper and producer Guru on his Jazzmatazz Vol. 2: The New Reality; rock stars Sting, Peter Gabriel, and Bruce Springsteen; and fellow Miles veteran Herbie Hancock, whom he joined at the 2005 edition of the jam-oriented Bonnaroo Festival in Tennessee as part of an ad hoc lineup of Herbie’s Headhunters, along with guitarist John Mayer, bassist Marcus Miller, trumpeter Roy Hargrove, and others.

Consistent with his self-chosen role as an explorer, both in and out the music, Garrett did not employ a translator during his travels in China or choose to stay in the sort of westernized hotels that cocoon guests from any meaningful interaction with the locals or life on the streets. He chose instead to approach the Chinese on their own terms, to address them, no matter how haltingly, in their own language wherever he went, which meant studying and attempting various dialects One of the things Kenny Garrett accomplished while in China was climbing to the highest point of The Great Wall. But the overall journey to China carried much more symbolism. It was about going beyond perceived barriers. He saw a side of the people of China that deeply touched his heart. 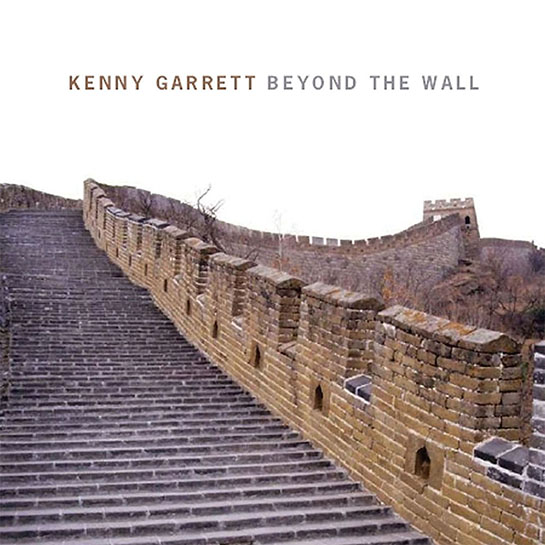