A ten-time Grammy Award winner, Bobby McFerrin is one of the world's best-known vocal innovators and improvisers, a world-renowned classical conductor, the creator of the song "Don't Worry Be Happy," and a passionate spokesman for music education. His recordings have sold over 20 million copies, and his collaborations including those with with Yo-Yo Ma, Chick Corea, the Vienna Philharmonic, and Herbie Hancock have established him as an ambassador of both the classical and jazz worlds.

With a four-octave range and a vast array of vocal techniques, McFerrin is no mere singer; he is a vocal explorer who has combined jazz, folk, and a multitude of world music influences—choral, a cappella, and classical music—with his own ingredients. As a conductor, Bobby is able to convey his innate musicality in an entirely different context. He has worked with such orchestras as the New York Philharmonic, the Cleveland Orchestra, the Chicago Symphony, the Philadelphia Orchestra, and the Vienna Philharmonic. 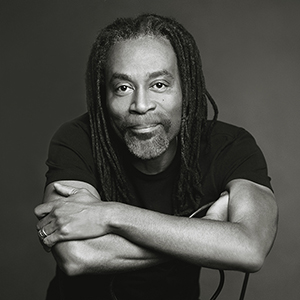