Nonesuch Events for the Weekend of September 23–25

Joshua Redman, Brad Mehldau, Christian McBride, and Brian Blade kicked off their fall tour featuring music from their just-released album, LongGone, and their two previously released albums, RoundAgain and MoodSwing, at the Soraya in Northridge, California, last night. The quartet continues its tour in California this weekend, with a show at SFJAZZ Center Miner Auditorium in San Francisco tonight, a set on the Jimmy Lyons Stage at the Monterey Jazz Festival on Saturday, and two sets at the Blue Note Napa at Charles Krug Winery in St. Helena on Sunday.

Timo Andres is joined by fellow composer/keyboardist Annie Hart for a concert at The Owl Music Parlor in Brooklyn on Sunday. They present an evening of music for piano, keyboards, and synthesizers, including works by themselves, Philip Glass, and others.

The Black Keys kick off the next leg of their Dropout Boogie tour at the T-Mobile Arena in Las Vegas tonight as part of the iHeart Radio Music Festival.

Michelle Branch celebrates the release of her new album, The Trouble with Fever, at The Fillmore in San Francisco on Saturday. The tour culminates in two concerts at the Troubadour in Los Angeles, the latter of which, on Tuesday, will stream live via Flymachine.

Joachim Cooder performs at the Blind Willie McTell Music Festival in Thomson, Georgia, on Saturday. He spoke with the Augusta Press about the festival and his Nonesuch debut album, Over That Road I’m Bound, on which he uses the plain-spoken songs of country-music progenitor and banjo player Uncle Dave Macon as a jumping off point, tinkering with the lyrics and reworking melodies for his chosen instrument: an electric mbira.

Cécile McLorin Salvant concludes her weeklong residency at the Blue Note in New York City, featuring songs from her Nonesuch debut album, Ghost Song, and more, with sets each night this weekend.

Caroline Shaw and Sō Percussion perform songs from their 2021 album Let the Soil Play Its Simple Part in a free event at Skidmore College’s Tang Teaching Museum in Saratoga, New York, tonight. On the album, with Shaw on vocals and Sō filling out this new band, they developed songs in the studio, with lyrics inspired by their own wide-ranging interests: James Joyce, the Sacred Harp hymnal, a poem by Anne Carson, the Bible’s Book of Ruth, the American roots tune “I’ll Fly Away,” the pop music of ABBA, and more.

Molly Tuttle and Golden Highway perform songs from their debut album, Crooked Tree, in two festival sets this weekend: at Prairie Island Campground in Winona, Minnesota, tonight, as part of the Boats & Bluegrass Festival, and at The Park at Harlinsdale in Franklin, Tennessee, for the Pilgrimage Festival on Sunday (the same day Lake Street Dive performs as well).

Wilco have headed north, performing at the Southern Alberta Jubilee Auditorium in Calgary tonight, and back to the States for a sold-out show at The ELM in Bozeman, Montana, on Saturday. There’s just one week to go till the release of the 20th anniversary super deluxe and deluxe editions of the band’s groundbreaking album Yankee Hotel Foxtrot. 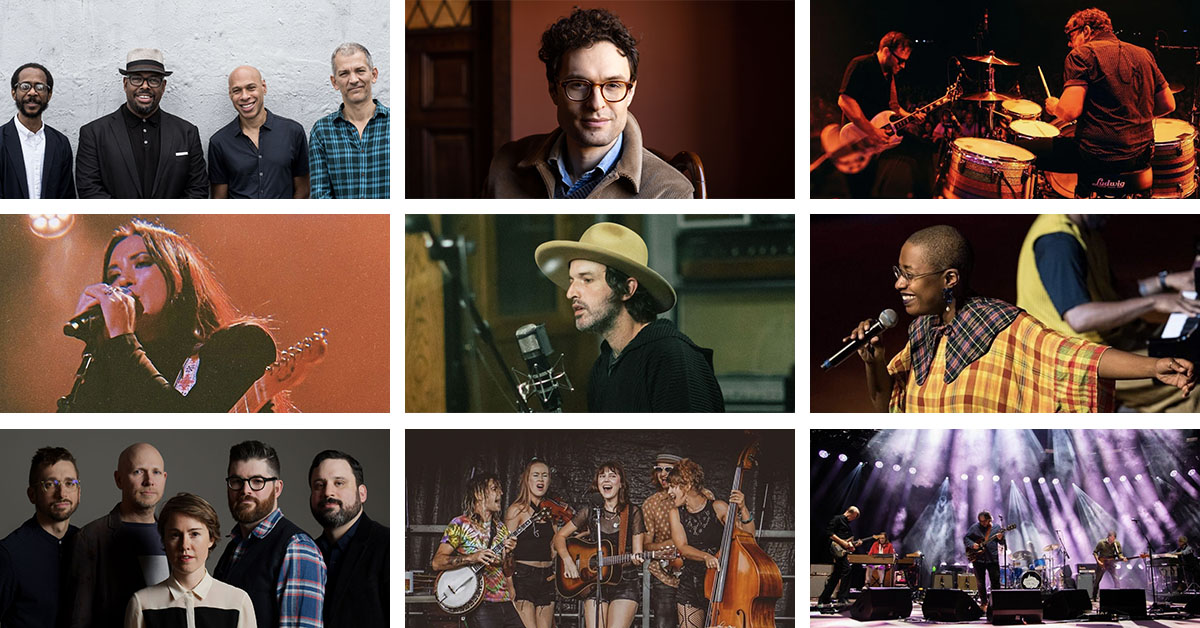 X By submitting my information, I agree to receive personalized updates and marketing messages about Nonesuch based on my information, interests, activities, website visits and device data and in accordance with the Privacy Policy. I understand that I can opt-out at any time by emailing privacypolicy@wmg.com.

Customize your notifications for tour dates near your hometown, birthday wishes, or special discounts in our online store!