Open Arms to Open Us lives up to NPR's claim that "there is no one universe for Ben LaMar Gay, he just sonic booms from one sound to another." On the album, recorded at International Anthem studios in Chicago, Gay interweaves jazz, blues, ballads, R&B, raga, new music, nursery rhyme, Tropicália, two-step, hip-hop, and beyond in his most colorful and communicable work yet, an expression of his signature omni-genre, "Pan-Americana" brew. Pre-order to download the album track "Sometimes I Forget How Summer Looks on You" now.

Composer, singer, and instrumental polymath Ben LaMar Gay releases his new album, Open Arms to Open Us, November 19 on International Anthem / Nonesuch Records. The first offering from the Southside Chicago native’s newest project is a pulsing melodic bellow featuring OHMME singers Sima Cunningham and Macie Stewart, titled "Sometimes I Forget How Summer Looks on You." According to Gay, the song is “inspired by the preparation one makes for another when it’s time for them to enter or exit an embrace, a memory or a life." You can watch the video for it here:

Highlighted in the New York Times’s Fall 2021 preview, Open Arms to Open Us is a dispatch from “postmodern folklorist” Gay’s current place in space, filled with imaginative arrangements and his “wise and confiding baritone.”

Reflecting on the meaning of the music in a prologue he wrote for Open Arms to Open Us, Gay says the album’s title is “a suggestion of a body movement that is used in many spiritual practices and is also a gesture that represents a type of understanding that leads to touch or a hug.” He also says, “Open Arms to Open Us deals with rhythm as an inheritance of information – sort of like DNA or RNA. Coping with the present-day bombardment of data and recycled ideologies from sources essentially fed by the creed ‘Destroy Them. Own the Earth,’ often leaves me with only one thing to look forward to: Rhythm.”

This latest project is the follow up to Gay’s 2018 critically-acclaimed, debut album Downtown Castles Can Never Block the Sun, which was a compilation of previously-unreleased material composed and produced by Gay over seven years. It was heralded by Pitchfork, NPR, and the Guardian, the last of which called it, “a record of endless depth and unpredictability.” But Gay’s work is not limited to album releases. He has composed for dance troupes (including the Ruth Page Civic Ballet) and architectural features (including a 2019 duet with the DuSable Bridge in downtown Chicago), and also has done extensive film score work (including the 2018 Tribeca Film Festival award-winning documentary The Good Fight). In 2019 he debuted ‘Hecky Naw! Angels!’ at the Museum of Contemporary Art Chicago, using video art and choreography to explore the shapes and sounds of Chicago’s Black social dances. 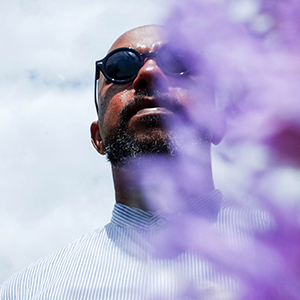