George Gershwin, born in Brooklyn in 1898, began his musical training at 13, and saw his first real fame with Al Jolson's 1919 performance of "Swanee." George's collaboration with his brother Ira produced a number of classic musical comedies, many of which have been recorded for the Nonesuch Records Gershwin Series. Nonesuch has also released two albums of piano music by George Gershwin using his original 1920s piano rolls.

George Gershwin, born in Brooklyn, New York, on September 26, 1898, began his musical training at 13. At 15, he left high school to work as a Tin Pan Alley "song plugger," and within three years, he had his first song published. Just a few years later, in 1919, Al Jolson's performance of Gershwin's "Swanee" brought the songwriter his first real fame. In 1924, when George teamed up with his older brother Ira, the Gershwins became the dominant songwriters on Broadway.

The extraordinary collaboration between the brothers Gerswhin produced such classic musical comedies as Lady, Be Good! (1924), Oh, Kay! (1926), Strike Up the Band (1927/30), Girl Crazy (1930), and Pardon My English (1933), all of which are featured in new cast recordings for the Nonesuch Records Gershwin Series, along with Standard & Gems, a collection of Gershwin classics performed by Dawn Upshaw, Audra McDonald, Judy Blazer, and others.

George Gershwin died an untimely death of a brain tumor at the age of 38. 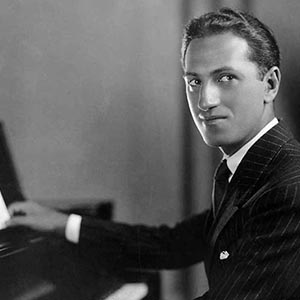