A major force in Latin American alternative music since the 1960s, Gustavo Santaolalla pioneered the fusion of his Argentine roots with rock, soul, African rhythms and Latin American folk. He established himself as one of the main institutions in the early stages of Argentine rock, the most respected musical movement of the Spanish-speaking youth. Santaolalla’s work as bandleader (Arco Iris, Soluna, Wet Picnic); solo artist (Santaolalla, GAS); and record producer (Café Tacuba, León Gieco, Caifanes, Maldita Vecindad, Los Prisionieros, Divididos, Molotov, etc.) further established him as an icon not only associated with Latin rock, but with a wide section of Latin American popular music as well.
With Ronroco, Santaolalla fuses conventional styles with a progressive sensibility, in an album of original tunes inspired by traditional Argentinean music and influenced by music of Japan, Africa and eastern Europe. The record takes its name from the ronroco, a stringed instrument similar to the charango, although slightly larger and lower in pitch. The charango, a small South American guitar similar to the ukulele, has ten strings arranged in pairs and a body that was originally fashioned from an armadillo shell. “I’ve been playing this instrument since I was a kid, collecting songs and thoughts about this record for a long time,” says Santaolalla. “The idea was to make a non-traditional album, a sonic landscape.”

Ronroco features Santaolalla on charango, ronroco, Andean pipes, whistles and guitar, in collaboration with long-time partner Aníbal Kerpel on vibraphone and melodica. The result is unlike anything Santaolalla has recorded in the past; an intimate musical journey and a unique work of love that has been years in the making. Ronroco is a project that Santaolalla holds special affection for: “This album materialized a different, less known side of me,” says Santaolalla. “The challenge was to keep it simple without giving up some rough edges, staying within the boundaries of the subtlety and delicacy that this music needs.” 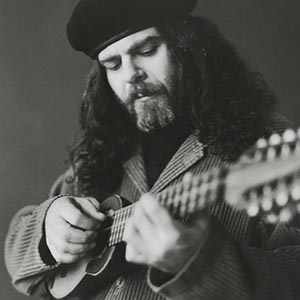