The Czech avant-garde violinist and singer Iva Bittová describes her work as, “my own personal folk music.” Her compositions and improvisations are abstract variations on folk-like melodies, shaped by the classical and gypsy music of the tiny Moravian villages where Bittová spent her formative years.

Bittová is an original artist who combines singing, playing and drama simultaneously to create songs that have been described as “so intimate and personal you can almost feel her breath on your ears.” (David Newgarden, CMJ) Her self-titled US debut culls material from the European releases “Ne Nehledej” and “Iva Bittová”. Uninhibited and unaffected, Bittová sings about issues that affect women, in poetry that is sensual, fervent and evocative.

An accomplished performer with a well-established reputation both in Europe and Japan, Bittová has also appeared at the Knitting Factory in New York City. A performance at Finland’s Tampere festival in November 1996 sparked this reaction: “Simultaneously singing an exquisite, melodic narrative of a woman’s passage from childhood to old age in beguilingly accented English…she demonstrated the aplomb of Jimi Hendrix with none of his excess. She also displayed considerable range, unflappable grace and a sense of humor” (Howard Mandel, RhythmMusic)

Iva Bittová was born in Bruntal, in northern Moravia. Her father, a gypsy fiddler, relocated the family often. Bittová attended violin and ballet classes as a child and also appeared in the Silesian Theatre of Zdenek Nejedly. As a teenager she auditioned at a local conservatory and was not accepted, and instead entered an apprenticeship in a toyshop. Bittová was subsequently admitted to the conservatory the following year and studied music and drama. Upon completion of school in Brno, she won a contract at the avant-garde Theatre On A String. She has since appeared in multiple television and film roles, including the documentary film about Fred Frith, “Step Across The Border.”

Reflecting on her life-long work as a performer, Bittová has said, “I have found the way to myself and thus also to others. Understand there are many hearts in the world, and each beats differently.” 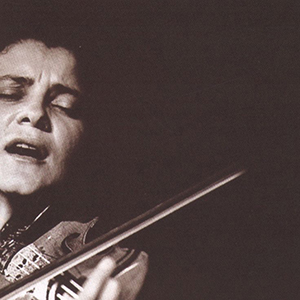