The singer lives in the tiny, forgotten town of Bernice, Louisiana, right near the Arkansas line, but in his younger days his music took him all over the world. Joining the Army as a teenager, Finley was sent to Europe as a helicopter technician but found more appealing work as the leader of the Army band, and toured the continent many times over on guitar and vocals. Following his rambling military service, he learned the trade of carpentry and settled back home in the States. He leaned on his gospel and blues songs for a hobby rather than career, and mostly confined his artistry to the streets of the South. But now, in the true spirit of the American Dream, Finley's music is once again primed to reach doors and shores at home and abroad, as his new LP Goin' Platinum! was released through Dan Auerbach's Easy Eye Sound in December 2017.

Finley, who has lost most of his eyesight and was recently forced to retire from carpentering, is a self-taught musician who started writing his own songs at age 10. Learning to play by ear, he developed a unique personal style that continues to serve him well today. "When you train yourself by ear you don't always get the chords as perfect as they should be—and sometimes you stumble upon a better chord," he says. "It really is a never-ending process; I'm constantly learning, and there's always room for improvement. I've been playing for about 52 years; if you're satisfied with everything you do, that don't leave no room to grow. But the main thing, I got a great team putting this stuff together. God blessed me with the voice, but the connections are getting me in the right place at the right time in front of the right people, so I can display what I got."

It's that kind of team-player attitude that has helped rejuvenate his career. A few years back, Finley was playing some R & B songs to a street crowd in Arkansas when he met a member of the Music Maker Foundation, an organization that provides direct support to older and underprivileged musicians. One thing led to another, and before you know it, Finley had written, recorded, and released an LP, Age Don't Mean a Thing, on Big Legal Mess Records in the fall of 2016.

"The way it happened so fast kinda surprised all of us," he says. "We wasn't looking for it to move forward at that late time in my life. It's a win-win situation, because if I hadn't started losing my sight I probably would have still been carpentering."

Yet another win-win would present itself when Auerbach, The Black Keys frontman and new Nashville-based record label owner, was sent a video of the musician playing songs on the street. Recognizing the singer's immense and innate talent, he invited Finley to sing with him on the score for a friend's graphic novel—a dark, bluesy project released in May called Murder Ballads. But it wasn't until the pair got into the studio together that Auerbach fully understood the exceptional power of Finley's voice—and where that might take them.

"I realized very quickly Robert's capable of doing so much more than old blues songs," Auerbach says. "He could do a wide range of things very easily. He's a blues guitar player, but when he puts his guitar down, you could set him in front of an orchestra and he would sing just as good as Ray Charles on the first take. He has that magnetic hugeness about his voice and just knows where to put it in the pocket, always."

And so, Auerbach gathered to his studio in Tennessee a Murderer's Row of all-time-great session musicians to record an album of songs he had written with the likes of John Prine, Nick Lowe, Pat McLaughlin, and others, with Finley as their vocal anchor. From drummer Gene Chrisman (Elvis Presley, Aretha Franklin, Dusty Springfield) to keys player Bobby Woods (JJ Cale, Bobby Womack) to horns by Preservation Hall and guitar by the legendary Duane Eddy himself, the assemblage was nothing short of towering—and, for Auerbach, the focus on Finley provided the icing on the cake.

"For me, each person playing on the record is who I consider personally to be at the peak of their job," Auerbach says. "Robert is one of the greatest singers I've ever heard in my life, Gene Chrisman played on "Natural Woman" and "Son of a Preacher Man"…all these voices coming together, all these different writers who contributed, too. This record is made with respect to the end product like they used to do on all the old soul records. I just happened to have a bunch of songs and I knew some of them Robert would kill—I could hear his voice, and pretty much it always turned out to be right."

The significance of the occasion and the players was not lost on Finley for a second. "These guys are legends in their own time—I'm the new kid on the block, even though I'm 63 years old, I'm the youngest one in the band," Finley says. "I just sat back and watched 'em, ain't much I could tell 'em. I tried to be neutral, to make suggestions but not make any complaints. I'm just grateful to be part of the team and working with such extraordinary guys. We hooked up the soul and rock and roll and made one hell of a record with something to please everybody."

And now we have Goin' Platinum!, the newest effort from the soon-to-be legendary soul singer Robert Finley and his crack band of geniuses. From the lovelorn bombast of "If You Forget My Love" to the soul-stirring "Medicine Woman," and the home-on-the-road ripper "Empty Arms" to the yearning "Honey Let Me Stay the Night," all capped by the epic closer "Holy Wine," featuring Finley's ethereal falsetto, Finley's performance left Auerbach speechless—as it will anyone who lays ears to it.

"I didn't ever have to play him any references, I just let him sing," Auerbach says. "He naturally did what the song wanted to hear. He was capable of doing it in this huge bark, this soft whisper, a falsetto…I said, 'Can you sing falsetto?' He said, 'I don't know.' 'Why don't you give it a shot and see what happens.' And he sang 'Holy Wine," just like you hear it on the record. We were all sitting in the control room and my brain short-circuited."

As for the album title, Auerbach gives all credit to Finley and his huge but wholly considerate personality. "He was just beaming from the second he walked in the door," Auerbach says. "Every time he'd listen to playback, he'd say, 'It's goin' platinum.' That was his catch phrase. He's larger than life. When he walked into the session he had on a three-quarter-length leather duster, leather pants, a giant belt buckle, red sparkle shirt tucked in, cowboy hat, snakeskin cowboy boots… Like he instinctually knows what to do when he's singing, he knew this was his time to shine. Robert just showed up to work and was smiling all day long. All of us were."

For Finley, all praise is due to the practice itself, and to the instincts, ear, and company of which he is proud to be part. And from this point on, his focus now shifts to his performance and his bringing it to the people, which he is finally—magically—able to do again on a global scale.

"Now I'm concerned about delivering the message to the audience," he says. "We did a great job on the recording but it's not over yet, it's gotta be done before the live audience, that's when my real task comes in. What comes from the heart goes to the heart; constantly pouring your soul into it so that when you deliver it, people can feel what you feeling. To me that's the ultimate challenge, to get them to feel what you feel. And if they do, you will know it by the end of the song." 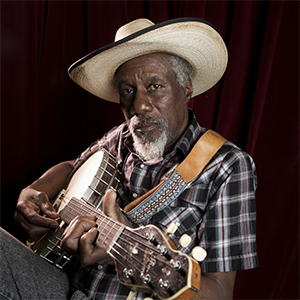