The Tragic Treasury: Songs from A Series of Unfortunate Events, is the long-awaited CD companion to the best-selling books by prolific but publicity-shy author Lemony Snicket. The CD is “executed” by The Gothic Archies, who are—or more to the point, is—singer-songwriter Stephin Merritt, with a little musical help from Mr. Snicket himself. Until now, these tracks were only individually available on the audio book versions of the thirteen-volume Series of Unfortunate Events. Merritt’s longtime followers may also recall that the Magnetic Fields founder had previously released a Gothic Archies EP on Merge Records, The New Despair, nearly a decade ago, quickly garnering a fan base that included writers Neil Gaiman and Stephen King. Defined by Merritt as his “goth-bubblegum band,” The Gothic Archies are an artfully gloomy invention that anticipated the Snicket-ian sensibility with such song titles as “It’s Useless To Struggle” and “The Abandoned Castle of My Soul.” Snicket fans—perhaps too young to have followed Merritt’s peripatetic career, though their parents may secretly harbor such knowledge—will welcome these fifteen new miserable Snicket-inspired numbers, now collected for the first time on one disc.

Merritt and Snicket were clearly made for each other, artistically speaking. Merritt’s trademark sangfroid lyrics are inspired by Snicket’s comically creepy narratives; “When you see Count Olaf,” he writes of the books’ arch villain, “Count to zero…then scream and run away! Run…or die!” According to Snicket spokesperson Daniel Handler, this collaboration was the product of practical necessity, not creative serendipity. Handler—in his own words, “an adjunct accordionist” for Magnetic Fields, having appeared with the group in concert and as a guest player on their landmark 69 Love Songs—was embarking on a book tour to promote the first installment of Snicket’s epic, The Bad Beginning. The publishers told him that, as the public face of Lemony Snicket, “I needed to come up with a presentation to keep as many as 100 children quiet for 45 minutes—and the accordion is very loud. I thought I could play the accordion and sing, so I asked Stephin to write something. In fact, I have the distinct memory of going to the ATM and withdrawing enough cash and paying him directly upon commission of the song.”

The first book, The Bad Beginning was, in fact, the start of a publishing industry phenomenon. In deadpan prose filled with big words that Snicket subversively encourages young readers to look up, the author chronicles the death-defying adventures of the three orphaned but resourceful Baudelaire children as they attempt to evade the clutches of their evil, many-times-removed cousin, Count Olaf, and his nefarious acting troupe. A family fortune is constantly at stake, along with their young lives. For this auspicious debut, Merritt composed “Scream and Run Away,” which remains a cherished favorite among Snicket readers. However, they clearly did not heed the advice explicit in Merritt’s title; they just kept reading. Since its introduction in 1999, the series, now reaching its thirteenth and final volume, has sold 28 million books in the U.S. and more than 50 million worldwide, in 38 countries. The first three installments were adapted for a popular 2004 film starring Jim Carrey and Meryl Streep.

Although the books have attracted a large pre-teen following, the work has a much wider appeal. Snicket’s spoofs of the cheap, Victorian-era serialized novels are easy-to-read but surprisingly sophisticated page-turners that have kept many a parent absorbed at night long after their little ones have nodded off. They’ve also attracted a college-age audience that appreciates Snicket’s irreverent, tongue-in-cheek misanthropy and goth-friendly attitude. (For Lemony Snicket, black will always be the new black.) Snicket’s musical collaboration with Merritt, who sings and plays all instruments except for the accordion, is as smart and fiendishly funny as his prose. Each song does correspond with a specific book, but listeners need no familiarity with the series to appreciate these sardonic tunes, with titles like “The World is a Very Scary Place” and “Smile! No One Cares How You Feel.”

For years Handler has performed Merritt’s made-to-order tunes at author appearances and retail events throughout the country, and he is threatening to bring Merritt with him for some special events to mark the release of the long-awaited thirteenth—and final—installment of the series, The End. The aptly named book will be published on October 13, 2006—Friday the 13th, of course. The Tragic Treasury CD arrives during the same week. For the final Snicket volume, during which the Beaudelaires find themselves lost at sea, Merritt has composed “Shipwrecked,” a darkly clever number with something of a romantic element: “Off from distractions and matters of state/We could quit smoking and quickly lose weight/Sleeping ‘til noon and then staying up late/At latitude zero and longitude eight.” In an interview, Handler wondered aloud if the lyrics might even be autobiographical, if indeed Merritt had at one time in his life been shipwrecked.

If he had been, Merritt confessed, the memory of that, as with any recollection of the monetary exchange Handler insists marked the beginning of this musical partnership, has long been repressed. But he does concede that “Walking My Gargoyle”—a track that originally accompanied The Carnivorous Carnival audio book—does have a personal association: “It’s kind of a metaphor for my dog Irving, who looks gargoyle-like in certain ways, except that he’s cute and fluffy. But he does have big ears and a menacing scowl if he wants to and he walks down the street trying to scare people.”

Along with “Freakshow,” (a new composition that also accompanies the Carnivorous Carnival), The Tragic Treasury includes one other previously unreleased track, “We Are the Gothic Archies.” This slow, gloomily produced bubblegum theme song is in the spirit of “Hey Hey, We’re the Monkees,” except here the band expresses a more thuggish sentiment: “Don’t mess with us or we’ll kill you”. Listeners of a certain age will remember the original Archies, a late-sixties bubblegum group comprised of faceless studio musicians impersonating relentlessly upbeat, high-school age characters from the Archie and Jughead comic book series, which yielded one enduring hit, the impossible-to-resist “Sugar Sugar.” Handler states: “I’d like to picture the Archies overcoming their constant good cheer and whirling into a vortex of black lipstick and becoming the Gothic Archies. Even Jughead’s crown would be stained like MacBeth’s.”

Prior to the Lemony Snicket series, Handler and Merritt had begun working on a musical, which they hope one day to revisit. Entitled The Song From Venus, Handler describes the film as “about a song from Venus that makes everyone fall in love, except there’s an odd number of people in the world. The protagonist is a young man in search of love. Even when there’s a worldwide epidemic of love, however, he doesn’t get any.”

On his own, Merritt has already released an album of musical theater works via Nonesuch, Showtunes, featuring selections from three music theater pieces directed by Chen Shi-Zheng: The Orphan of Zhao, Peach Blossom Fan, and My Life As a Fairy Tale. (Full scores from these shows are available online.) He’s also released soundtracks for the Academy Award-nominated Pieces of April and the indie film Eban and Charley. Merritt admits rather wistfully that he’d like to get the Gothic Archies back in the studio: “It would be nice to release a Gothic Archies record more than once a decade. But,” he sighs, “it’s so depressing.”

Perusing the Gothic Archies’ oeuvre, which features such titles as the aforementioned “Scream and Run Away,” “The World is a Very Scary Place” and “Things Are Not What They Appear,” Handler wonders, “What is it about the Gothic Archies that makes them prone to grand philosophical statements?”

“When you run out of things to say,” Merritt suggests, “you can always just say the world is really horrible.”

“Or,” interjects Handler, “if you’re at a social gathering and pressed into making small talk…”

“…you can point out how wretched everything is,” Merritt finishes.

“Nothing breaks the ice like the statement, ‘Isn’t everything terrible?’” concludes Handler. 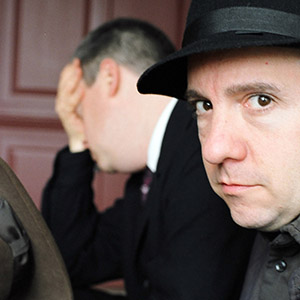 About The Gothic Archies