For his 2020 album with Exploding Star Orchestra, Dimensional Stardust (International Anthem / Nonesuch Records), multidisciplinary artist Rob Mazurek arranged his pieces for eleven musicians, including Jeff Parker, and commissioned his long-time lyrics collaborator Damon Locks to draft original texts for the songs. The album recalls an array of Mazurek’s symphonic­ influences, from Béla Bartók to Morton Feldman to Gil Evans to Sun Ra to Pedro Santos to Bill Dixon to The Art Ensemble of Chicago. Opting to focus on tight ensemble orchestration over passages of open improvisation, he distills an orchestra of explosive improvisers into a graceful group exercise in melodic minimalism.

Marfa, Texas–based multidisciplinary abstractivist and creative auteur Rob Mazurek released a new album with Exploding Star Orchestra, Dimensional Stardust, via International Anthem / Nonesuch Records on November 20, 2020. Mazurek has made an indelible impact on creative music over the past thirty years since emerging from the musical nexus of the 1990s Chicago scene. He has written more than 400 compositions, is featured on more than seventy recordings from various labels, and has led or co-led many ensembles, including Exploding Star Orchestra (his flagship large ensemble), Chicago Underground, Isotope 217, and more.

Dimensional Stardust recalls an array of Mazurek’s symphonic­ influences—from Béla Bartók to Morton Feldman to Gil Evans to Sun Ra to Pedro Santos to Bill Dixon to The Art Ensemble of Chicago. Opting to focus on tight ensemble orchestration over passages of open improvisation, Mazurek distills an orchestra of explosive improvisers into a beautifully restrained, graceful group exercise in melodic minimalism. Mazurek himself is sparsely present as an instrumentalist, only occasionally joining the ensemble with his piccolo trumpet. All the way through, the electro-acoustic poly-rhythmic percussion section (Chad Taylor, Mikel Patrick Avery, and John Herndon) churns, peaking in rare soloist moments by flutist Nicole Mitchell (on the opener “Sun Core Tet”) and guitarist Jeff Parker (on “The Careening Prism Within”).

The song "A Wrinkle in Time Sets Concentric Circles Reeling," Mazurek explains, is "a tone poem in three parts concerning possibilities. There are so many different sides to a thing ... a kaleidoscope of possibility exists in each moment in each breath in each movement. The first part of the piece is the winding up, intricate layering, the study of time, of angles, of color, of space. The second part is the breakthrough, the realization that each moment is a possibility for cathartic action through universal love wave correspondence, the sound of feeling, the sound of healing, the sound of joy. The third part continues this idea as if in a dream...what is real, what is imagined...perhaps we can break through the galaxial ceiling of what we think we know and treat each other, this planet, this universe with the respect and dignity it so deserves."

Avery says of his accompanying video: "Watching and being around my five-year-old daughter, I am constantly reminded of the imaginary spirit that is in all of us. Over time we are subject to a fading of this spirit. In these films I wanted to explore the idea of our imagination being a different type of currency that we must fight to protect and carry with us despite its oppositions."

Painting by Rob Mazurek: Some Other Time. 2020.
Gatefold Prints by Rob Mazurek with technical assistance by Mathieu Constans
Package Design by Craig Hansen 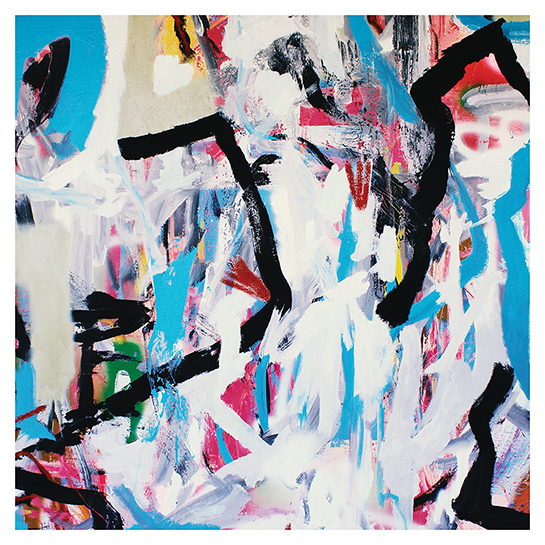