Radiohead drummer Philip Selway's first solo album, Familial, with its sublimely fragile, haunting, and heartfelt songs, is likely to surprise many. "But when you listen to the beautifully produced pieces Selway came up with on Familial," says NPR, "it's easy to see him not as a percussionist, but as a genuine singer-songwriter."

“When you’re the same age as the Prime Minister, you think, I’d better get on with this,” Philip Selway grins as he acknowledges the new sea change in British politics but popularity is generally a passing phase while your first album—that’s forever. Knowing time waits for no one, he has delivered Familial, a collection of sublimely fragile, haunting, and heartfelt songs that will surprise many, and not only because drummers traditionally don’t do this kind of thing. Familial is so persuasively good, it sounds like Selway has always been a singer-songwriter.

It’s a sideline solo project, mind. The morning he talks about his record for the very first time, he still has to leave for a rehearsal down the road by an acclaimed Oxford-based band, named Radiohead, for whom Selway has drummed immaculately and imaginatively for the last 20 years. And with the admission, “It’s a cardinal sin for drummers to come in to rehearsals with the comment ‘I’ve got this song’!” he knows the time has come for his songs, put on ice when drumming took over in his late teens, to emerge into the light.

Listeners to Familial will immediately recognize the ring of absolute truth, melodies and words fired by emotions, and not a whiff of dilettante posturing. In truth, what truly ignited Selway’s efforts to record wasn’t Britain’s political transformation but the loss of his mother in 2006. “It was one of those watershed moments that shake everything up, and you get a greater sense of urgency on what you want to do in life,” he says.

He admits it still needed a leap in confidence for this self-confessed “bedroom noodler” to trust he could capture the emotional resonance he desired. As he notes, “going through the years with Radiohead, the bar is set a lot higher.”

This is where another acclaimed singer-songwriter enters the frame. In 2001, Neil Finn (of Crowded House, Finn Brothers, and solo fame) organized an impromptu gathering of talent—including Johnny Marr (The Smiths), Eddie Vedder (Pearl Jam), Lisa Germano, former Soul Coughing bassist Sebastian Steinberg, and Radiohead’s Ed O’Brien and Philip—in aid of charity. The resulting live album 7 Worlds Collide was credited to Neil Finn and Friends, but when he revived the project in 2008 under the 7 Worlds Collide name, the singing/songwriting was divided among the ranks, which now included four members of Wilco.

As the ensemble beavered away on three floors of Finn’s Auckland studio, Philip found himself occupying a stairwell (more glamorous than it sounds) and coming up with “The Ties That Bind Us,” with which he made his singing debut (backing vocals for Radiohead don’t count), in Auckland in January, 2009. That song, and an earlier number, “The Witching Hour,” were recorded for 7WC’s The Sun Came Out album, released in August 2009, both seeing Selway hold his own among esteemed singer-songwriter company. “Neil inspires people’s confidence around him because he is so confident to begin with. I don’t think anyone knew I played guitar or sang; I didn’t think I could sing before! But gradually as people passed by, they picked up on stuff. But five minutes before I due to go on stage, I realized I was playing after Wilco, and thought, what am I doing? That first show was a real baptism of fire. But it was friendly fire.”

Back home, Selway asked Courtyard Studios’ resident engineer and producer-about-town Ian Davenport to help produce the forthcoming sessions. Then Selway asked Germano, Steinberg, and Wilco drummer Glenn Kotche and multi-instrumentalist Patrick Sansone to come and make the record with him. “The Ties That Bind Us” also features Neil Finn’s New Zealand pal Don McGlashan on euphonium and flugelhorn, while a gorgeous, muted horn quartet provides the coda to “A Simple Life.”

Yet despite the rock pedigree on show, Familial is as far from a rock record as you’ll get. But neither are its ballads defined by folk, but rather by something much wider and more contemporary. Curiously, defined drums are barely present on the record, which instead favors percussive loops and textures. At times the beats and instrumental colors are so subtle, it sounds like the acoustic air in the room is setting the mood, leaving ample space for the lyrics, which clearly come from the most intimate of places.

Take “The Ties That Bind Us,” which was written about Selway’s family (“You my son I held in my arms / Close and keeping you safe from harm / I want to show you another way / I want to keep you from my mistakes”). But the first completed lyric he was happy with was “Broken Promises,” inspired by his mum (“Once the hurt has faded / Only the love will remain”). “Losing my mother was the departure point for this record, but it’s not about going through the grieving process, more that process of having everything shaken up,” Selway points out.

The album’s intro, “By Some Miracle,” with its image of “a black dog in the basement,” addresses depression, but it’s more shaped by what Selway calls “taking responsibility for your actions, to have choices in front of you that might have unsavory consequences, despite how strong the draw to them might be to them.” “Falling” raises the specter of “that little depressive cloud that comes over you, that make you misinterpret everything, and how a couple of days later, you realize how over-dramatic that point was, no matter how valid those feelings were at the time.”

There’s a potential link here to “All Eyes on You,” inspired by the stage fright Selway experienced on Radiohead’s first American tour in 1993 following the sudden life-changing success of “Creep.” For anyone seeking personal revelation about the band itself, it’s only there in the closing “The Witching Hour”: “Faces round a fire / Lights across the sky,” refers to the camping trip in the woods that Ed O’Brien organized for his bachelor party. And for anyone seeking musical parallels between that band and Familial, check out “Beyond Reason,” with its scratchy loop and ghostly vocal layers. “If stuff came up that sounded very Radiohead, I’d edit it out, but at the same time, I wouldn’t do so to the detriment of something I felt was genuinely me as much as genuinely Radiohead too. I don’t want to cut off an arm for the sake of it.”

But Radiohead’s real relevance here is the fact they’re family, as your closest friends become. And family matters to Philip—married with three kids, with sisters of his own, and the knowledge that “those I love will carry me home,” according to the album’s parting words. In “The Simple Life,” when he sings “There’s a place we can go / There’s a place where we both can hide,” he’s referring to “finding the mental space and strength you need to find as family, or any significant relationship, with your partner or your bandmates.” Not for nothing is the album called Familial. “I didn’t set out to write a record about families but that’s such a major part of who I am, so it comes through.”

Even so, the record’s working title was Don’t Look Down, named after the penultimate track (at five minutes, easily the album’s longest), which Philip discovered was also the title of Cerys Matthews’ last album. The song speaks for Selway and all those in middle age—but less a mid-life crisis than mid-life clarity. “I’ve made this record at more or less at the mid-point in my life, where in one sense you’ve reached the height of your powers in terms of responsibility and experience, which is a very heady time. If you stop and take it all in, it can become a scary place. So don’t look down, keep going! But you choose to be here too. This is the point where you’re driving the bus.”

Philip Selway—singer-songwriter, drummer, parent, bus driver—what’s next? Actually: a tour of his own, following the dates he co-headlined in April with Lisa Germano in Italy, Spain, and Portugal, alternating songs; he drummed on hers and she added vocals to his (and Sebastian Steinberg added bass to both). “I want to keep the intimacy and the textures but I also want to push the rhythmical side a bit more, almost like a remix of the album, and seeing where that takes me. There were other places I could have gone to with Familial, but I ended up in a good place anyway.”

Familial is out August 31 on Nonesuch.

This album is available from Nonesuch in the US and Canada only. 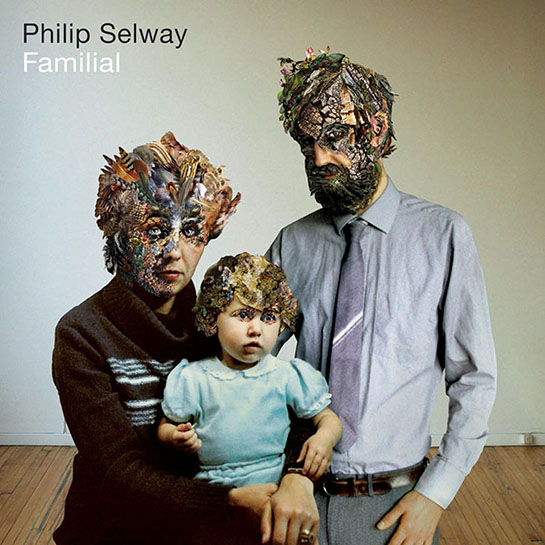