Iron and Wine makes its Nonesuch Records debut with Ghost on Ghost, the fifth release from singer-songwriter Sam Beam under that pen name. The album was recorded in Brooklyn and produced by Beam’s longtime associate Brian Deck. "Every song feels lived in, and radiates palpable warmth," says American Songwriter; they "sound absolutely sublime." Uncut too calls it "sublime ... a work of immense beauty and scale."  The AP says: "Ghost on Ghost is a wonderfully produced and assembled record, propelled with joyous momentum even on tracks with darker lyrics ... With each successive album, Beam has been able to gradually expand and layer his sound with taste and dexterity."

Iron and Wine makes its Nonesuch Records debut with Ghost on Ghost in the US on April 16, 2013 (April 15 on 4AD in Europe, Japan, Australia and New Zealand). Ghost on Ghost is the fifth release from singer-songwriter Sam Beam, using the pen name Iron and Wine. The album was produced by Beam’s longtime associate Brian Deck (Modest Mouse, Califone, Fruit Bats) and follows 2011’s Kiss Each Other Clean, which debuted at #2 on the Billboard chart to critical acclaim.

Rolling Stone said of Kiss Each Other Clean that “pop music hadn’t seen anything like it since the heyday of Cat Stevens,” while Pitchfork said it “more closely resembles the lush, gold-toned singer songwriter records of the late 60s and early 70s—Astral Weeks, Goodbye Yellow Brick Road.”

For Ghost on Ghost, Beam sought to move from what he called the “anxious tension” of his two previous records. “This record felt like a reward to myself after the way I went about making the last few,” he says.

This album is available from Nonesuch Records for the world outside of Europe, Japan, Australia, and New Zealand 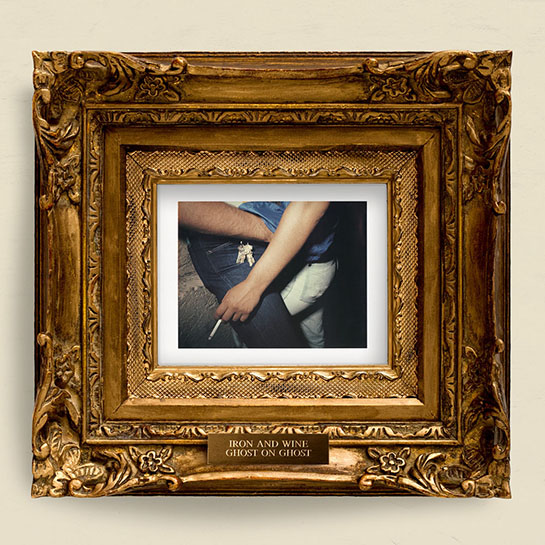