Celebrating Elliott Carter’s 100th birthday, this "covetable and historic" four-disc set (The Observer) includes most of the recordings Nonesuch made of Carter’s music between 1968 and 1985, with performances by such acclaimed musicians as Paul Jacobs, Gilbert Kalish, the Composers Quartet, Jan DeGaetani, Fred Sherry, Arthur Weisberg, the Contemporary Chamber Ensemble, and the Chicago Symphony Orchestra led by James Levine; plus a 58-page booklet, with photos, score examples, texts, and tributes by musicians and composers.

To celebrate Elliott Carter’s 100th birthday, Nonesuch released Elliott Carter: A Nonesuch Retrospective, a four-disc set, on February 24, 2009. The discs include most of the recordings Nonesuch made of Carter’s music between 1968 and 1985; The Observer calls the collection "covetable and historic."

A two-time Pulitzer Prize winner and the first composer to receive the United States National Medal of Arts, Elliott Carter is internationally recognized as one of the leading American voices of the 20th-century classical music tradition. First encouraged toward a musical career by his friend and mentor Charles Ives, Carter attended Harvard University, where he studied with Walter Piston, and later went to Paris, where for three years he studied with Nadia Boulanger. He then returned to New York to devote his time to composing and teaching. Carter was recognized by the Pulitzer Prize Committee for the first time in 1960 for his groundbreaking String Quartet No. 2. Stravinsky hailed Carter’s Double Concerto for Harpsichord & Piano with Two Chamber Orchestras (1961) and Piano Concerto (1967), as “masterpieces,” while Aaron Copland called him “one of America's most distinguished creative artists in any field.”

As Paul Griffiths writes in the box-set booklet:

Born when Enrico Caruso was cutting cylinders, Elliott Carter has lived through most of the history of recording, and contributed to that history through his associations with various companies. First among these was Nonesuch, beginning in 1969 and continuing for over twenty years. Two albums of the 1970s, featuring his first two string quartets and Double Concerto, played a conspicuous role in carrying his music to a wide audience, and so in bringing him the acclaim that encouraged him to go on, with undiminished vigor, into a ‘late period’ that has lasted more than thirty years. Nonesuch was not only the first label to give Carter’s music international distribution and continuing support, it also placed his work in an appropriate context of discovery and adventure.

Elliott Carter turned 100 years old on December 11, 2008. His centenary is being celebrated internationally with performances in New York, Madrid, Turin, Amsterdam, Paris, Berlin, Tokyo, Vienna, and London. A complete list of works and performances, as well as downloadable photos, images, biographies, and a video interview, can be found at carter100.com.

Texts for In Sleep, In Thunder from Collected Poems by Robert Lowell. Copyright © 2003 by Harriet Lowell and Sheridan Lowell. 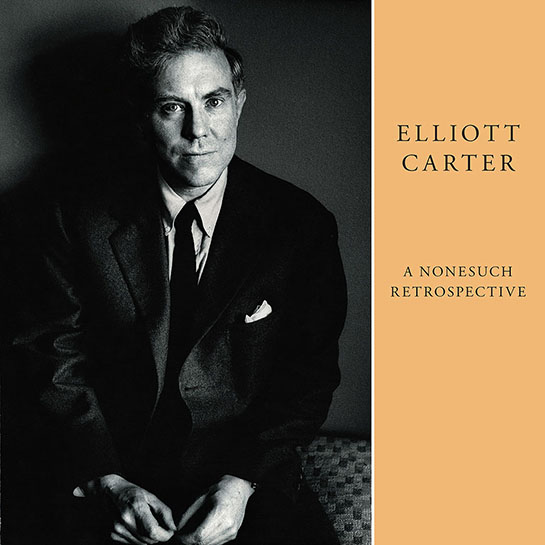