The Blue Hour is a song cycle born of a collaboration among five composers—Rachel Grimes, Angélica Negrón, Shara Nova, Caroline Shaw, and Sarah Kirkland Snider—commissioned and performed by the chamber orchestra A Far Cry, who are joined by singer Shara Nova. Set to excerpts from Carolyn Forché’s epic poem On Earth, the music follows one woman’s journey through the liminal space between life and death via thousands of hallucinatory and non-linear images. Exploring memories of childhood, war, love, and loss, The Blue Hour amplifies the beauty, pain, and fragility of human life from a collective female perspective.

New Amsterdam and Nonesuch Records released The Blue Hour, a song cycle written collaboratively by the female composers Rachel Grimes, Angélica Negrón, Shara Nova, Caroline Shaw, and Sarah Kirkland Snider, on October 14, 2022. The cycle was commissioned by, and is performed with, the Boston–based chamber orchestra A Far Cry. (Nova also is featured as vocal soloist.) Set to excerpts from Carolyn Forché’s epic poem On Earth, the music follows one woman’s journey through the space between life and death via thousands of hallucinatory and non-linear images. Exploring memories of childhood, of war, of love, and of loss, The Blue Hour amplifies the beauty, pain, and fragility of human life from a collective female perspective. The Washington Post calls it “a gorgeous and remarkably unified work.”

Snider says, “As composers, the five of us share an interest in storytelling, communication, mood, and atmosphere. A Far Cry had matchmade us for these reasons, but even they didn’t know the degree to which the five of us had inspired each other over the years. For example, Rachel Grimes was a lodestar for me—I had transcribed some of the music from her band Rachel’s twenty years ago just so I could play through it at the piano—and this music had a profound influence on my first song cycle, which I’d written for Shara Nova, who had also long been a muse for me. I had similarly revelatory experiences encountering the music of Caroline and Angélica; I was deeply inspired by them both.”

She continues, “When we first gathered to talk about this project, it was a circle of stories just like this, a sharing of deep gratitude for what we had meant to each other on our respective musical journeys. The process of creating the song cycle together reflected this. One of us would share an idea on Dropbox, and the next composer would find a kernel of inspiration within it for another piece, and so on. What I love about this song cycle is that you can hear, musically, what we have meant to each other over the years. It is an embodiment and celebration of a kind of musical sisterhood.”

A Far Cry violinist Alex Fortes adds, “Forché’s poem catalogs the scattered thoughts, visions, and imagery of a life passing ever closer to death, organized through the objective but arbitrary tool of alphabetization. The music similarly draws from an eclectic set of influences, at times setting the text quite literally ... and at times using extended string techniques to create kaleidoscopic sound-paintings of Forché’s moments of fantastical, jarring imagery. The various movements, each entirely written by one of the composers, accesses the personal vernaculars and interests of each composer.” 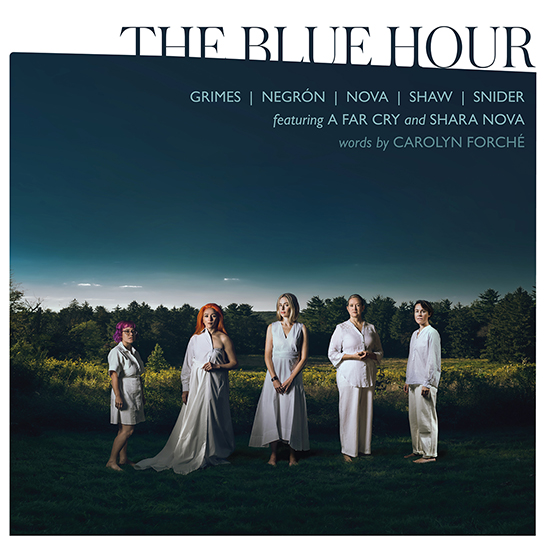 More From The Blue Hour