This uncommonly mature 21-year-old singer-songwriter’s Nonesuch debut balances the warm-hearted with the cold-blooded. Tell Me is a stunningly forthright 11-song set that addresses late-night longing, serial heartbreak, and intoxicatingly dangerous liaisons conducted in dimly lit barrooms or roadside motels. By the end, the only heart intact is Mayfield’s own. It’s as if she’d stripped the sentimentality and ruefulness from a bunch of classic country songs, leaving only stark emotion. The Black Keys’ singer and guitarist Dan Auerbach, who produced and engineered Tell Me at his Easy Eye Sound System studio in Akron, Ohio, matches Mayfield’s candor with eerily minimal, brilliantly constructed tracks that keep her mesmerizing, unadorned voice front and center.

Kent, Ohio, native Mayfield, at least as she portrays herself on record, could have walked out of a darkly dramatic Black Keys murder ballad like “Ten Cent Pistol.” In fact, many of the duo’s fans first learned of Mayfield through a soulful duet with Auerbach, “Things Ain’t Like They Used to Be,” that memorably closed the 2008 Black Keys disc, Attack and Release. Auerbach discovered Mayfield through her 2005 EP White Lies, self-pressed in a single run of 100 copies, that she’d cut at home with her brother, David. Auerbach was impressed enough with this bedroom recording to contact Mayfield via her MySpace page, leaving a simple message: “Hi, my name is Dan, and I play with a band called The Black Keys out of Akron.”
Together, they embarked on recording Mayfield’s bare-bones first album, the independently released With Blasphemy So Heartfelt, which garnered an 8.2 rating on Pitchfork and uniformly enthusiastic reviews elsewhere. NPR’s World Café declared she has “a mature sound that seems evolved beyond her years,” while the New York Times added that her sound is “guarded, insinuating, mesmerizing … music that lets you hear all its details.”

“I really like what Dan brings to the table,” Mayfield says of her ongoing collaboration with Auerbach, “the atmosphere he creates. He brings something that sounds the way I feel, that goes well with my songwriting. He does things that I wouldn’t necessarily do, which I really like. It’s always good to have someone whose opinion and musicianship might be different than your own.”

Her brother David, whose contemporary string band, Cadillac Sky, also is produced by Auerbach, was a significant contributor to Tell Me, too. He co-wrote the drum machine-driven title track with Mayfield and gave her the deceptively upbeat “Blue Skies Again,” co-written with Josh Joplin. As Mayfield explains, “I usually start writing everything by myself. For the new record, I would finish the songs and bring them to my brother David and say, ‘Hey, how would you want to help me make this better?’ He’s one of my favorite musicians and songwriters in the whole entire world. I grew up idolizing him, among other people, and he’s the one who I still look up to today and think, man, I want to write songs as good as he does. I was so excited for this album because he was able to come into the studio and record and write with me. He wasn’t out touring or recording on his own.

“There are so many things about this album that I was excited about,” Mayfield continues, “and one of them was to have my live band members”—guitarist Richie Kirkpatrick and drummer Scott Hartlaub—“plus my brother David and Dan Auerbach in one room together, collaborating and working. The last album was basically just me and Dan. This was the perfect studio band. Everyone created the new album together and it just sort of happened naturally. Listening to it now is like opening a present.”

On her previous album, the vicissitudes of love were also a recurring theme—but on that effort it was her own pain she was exorcising. This time the tables have turned: “It used to be me getting my heart broken; now it’s about me breaking other people’s hearts. It’s not something I sat down and intended to do—to write an album of songs about being mean to boys. But it’s kind of what was going on. You meet a boy at a show and then they’re like ‘Oh my God, I fell in love with Jessica Lea Mayfield last night…’ They obsess over you, so eventually you have to write a mean song about them. I guess it’s all I can do. I’m not going to get married and have someone’s baby. I have a career.

“I write exactly what I feel and exactly what I say,” she decides. “I can’t write a song about something I didn’t go through or know anything about; they all have my outlook on things. If I were practicing to use a bow and arrow, I would still find a way to write about it in the manner that I do, with that dark sort of spin on things.”

Tell Me may be dark, but it’s not dour: “There is a sense of dry humor in my work, especially with this new album. There’s a lot of secret, maniacal laughter going on. Even as I was writing the songs, I’d say, ‘Dan, I can’t say that,’ and he would reply, ‘Yeah, you can, that’s what you feel’. I’ll write something and the moment I think I can’t sing it, then I realize, oh shit, now I really have to do this because this is a really serious, deep emotion, something I really thought that I’m almost afraid to say. That’s what people relate to and I know that. I have to let down my guard, even though it’s really hard to do.”

Mayfield, who was born in Ohio and partly raised in Tennessee, has been performing since she was eight years old with her family’s bluegrass band, One Way Rider, and she was home-schooled along the way. As she dryly puts it now, “My parents made a point not to let school get in the way of my education.” They traveled in a 1956 tour bus previously used by Ernest Tubb, Bill Monroe, and Kitty Wells. For a time, Mayfield adopted the stage name Chittlin. The experience was as formative as it was unconventional: “It contributed to the way I am now, having to be somewhere different all the time, every day. I was always being somewhere else; my sense of home and comfort was constantly being on the go. My songwriting, the manner in which I write my songs, was really inspired by playing bluegrass music and playing bluegrass festivals. Sometimes you will hear a bluegrass song that’s upbeat in tempo but really sad in reality. Like, someone is cheating on their wife, ends up stabbing their wife, then killing themselves…”

When she was 11, Mayfield’s family returned to Ohio to care for her ailing grandparents and she started writing songs on her own: “My brother showed me a few chords, and I instantly developed this way that I sound. As a kid, I went through this phase of rebelling and listening to rock bands. I loved the Foo Fighters. So I have this mixture of bluegrass and all different types of music. When I think about it, I can see and hear every band that I’ve listened to in my music. That bit reminds me of the Foo Fighters, this reminds me of that Stone Temple Pilots song. It’s interesting to me to see what other people get out of it when I know where it really came from. People ask me, ‘Do you listen to Lucinda Williams?’ And I say ‘No, I’m just discovering these people. I’ve mostly listened to bluegrass and '90s rock.’”

She hasn’t lost her taste for the road, even though she’s been itinerant for a good part of her life: “I’ve toured a lot, almost consistently for my own solo career, since I was 19. There aren’t a lot of places I haven’t played. At this point, I know what I’m going to order off the hospitality menu of every venue in every city before I get there. Touring for myself I’ve played medium-sized rooms, but opening for Dan or Ray LaMontagne, Cake, Lucero, or The Avett Brothers, I played the bigger rooms. I’ve seen pretty much all the venues there are.”

She has attempted to put down some roots, having earned enough to afford an Ohio farmhouse of her own. But Mayfield, as the songs on Tell Me make clear, is not quite domesticated. In her rare moments of downtime at her new house, Mayfield admits, laughing, “Sometimes I feel like I’m in that movie Home Alone. I wake up in the morning, turn up the stereo all the way, eat leftover chicken wings and, like, drink a beer and jump on the bed. Sometimes I go crazy like a kid because the rest of the time I have so much responsibility.” 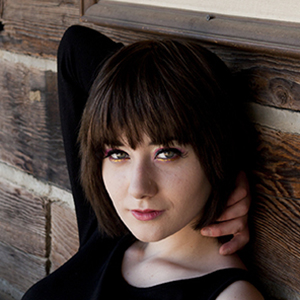