Manuel Galbán, the Cuban guitarist, pianist, and arranger, came to renown first for his work with Los Zafiros in the early 1960s and again, decades later, with Ry Cooder and many groups associated with the Buena Vista Social Club. Nonesuch released two albums with Galbán as co-leader—Mambo Sinuendo, with Cooder, and Bossa Cubana, a compilation of Los Zafiros recordings from the '60s—as well as many that feature contributions from Galbán, including albums by Ibrahim Ferrer and Omara Portuondo.

Manuel Galbán, the Cuban guitarist, pianist, and arranger, came to renown first for his work with Los Zafiros and again, decades later, with Ry Cooder and many groups associated with the Buena Vista Social Club.

Born in 1931 in the village of Gibara, Galbán learned to play guitar by watching and listening to his father and brothers. He began his professional career at age 13 with the Orchestra Villa Blanca. In 1956, Galbán moved to Havana and spent many years playing throughout the city in clubs and on radio. In 1963, he joined the recently formed Los Zafiros (The Sapphires), a vocal group that mixed Cuban music with American doo-wop and R&B and went on to international fame and continues to influence Cuban music today. With Los Zafiros, Galbán developed a unique guitar style that drew on early American rock ‘n’ roll and surf rock as well as Cuban guitar styles.

Manuel Galbán suffered a cardiac arrest and passed away in a hospital in Havana on July 7, 2011, at the age of 80.

"Manuel Galbán, Cuban maestro of Doo Wop Noir, has died," Cooder said of Galbán's passing. "This was the music you heard, walking down a dark street, behind old walls, in a ruined garden. You left the party—the talking and the laughter was much too loud. You felt something, and you listened. You listened to 'Herido de Sombras.'" 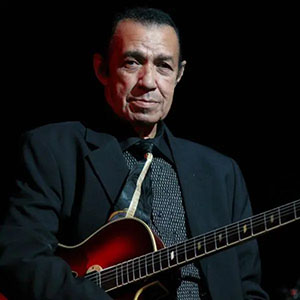