This four-song collaboration between Carolina Chocolate Drops and the New York–based gypsy punk band Luminescent Orchestrii was inspired by a spontaneous set together at the Folk Alliance festival in Memphis that Lumi guitarist Sxip Shirey described as “magic." Joining the bands on the EP is human beatboxer Adam Matta. No Depression says "the good times are palpable on this disc, starting from the very first notes."

The project began when both the Luminescent Orchestrii and the Carolina Chocolate Drops, longtime admirers of each others’ music, were performing at the Folk Alliance festival in Memphis, Tennessee. Every day in Memphis, the Lumiis would set up in the hall and do a short set for the passersby. One day the Lumiis’ Sxip Shirey noticed that the Drops’ Rhiannon Giddens was watching and asked her to join them. What followed was “magic … one of those rare festival moments that never happens again,” as Shirey said.

The Chocolate Drops were soon invited to Brooklyn to join the Luminescent Orchestrii and their friend human beatboxer Adam Matta to record “Knockin’,” from the Lumiis’ record Too Hot to Sleep, and Blu Cantrell’s “Hit ’Em Up Style,” which was on the Drops’ album Genuine Negro Jig. Next the Lumiis and Matta went down to Winston-Salem, North Carolina, to record a new version of the Sam Morgan jazz classic “Short Dress Gal” and the Lumii song “Escoutas (Diga Diga Diga).” These four songs comprise Carolina Chocolate Drops / Luminescent Orchestrii.

The Carolina Chocolate Drops formed after band members Dom Flemons, Rhiannon Giddens, and Justin Robinson met at the Black Banjo Gathering in Boone, North Carolina, in 2005; they have toured continuously since the band’s inception. All three trained in the Piedmont banjo and fiddle musical tradition under the tutelage of Joe Thompson. The members come from diverse musical backgrounds, sharing singing duties and swapping instruments throughout their sets. Flemons has immersed himself in the music of the past, with a prodigious record collection and an immense knowledge of the different playing styles of the blues, country, and string band traditions. In addition to her work with Joe Thompson, Giddens—a Piedmont native—studied opera at Oberlin Conservatory, performs with a Celtic band and is also an avid contra dancer and caller. Robinson, the group’s main fiddler, also plays banjo; he grew up in a house full of musicians—his mother is a classically trained opera singer and cellist, his sister a classical pianist and his grandfather a harmonica player.

The Luminescent Orchestrii’s music features Romanian gypsy melodies, punk frenzy, salty tangos, hard-rocking klezmer, haunting Balkan harmony, hip-hop beats, and Appalachian fiddle, all eaten and spit out by two violins, resophonic guitar, bullhorn harmonica, and bass. The band members are from different scenes in New York City, yet come together through their love of Balkan and Gypsy music. Sxip Shirey is an international circus composer, Sarah Alden is an old-time fiddle player, Rima Fand is an experimental theater composer, and Benjy Fox-Rosen is a free-jazz bassist. It is not uncommon to find Shirey playing with the Bindlestiff Family Cirkus, Fand composing music for a Lorca puppet show, Fox-Rosen at a jazz gig, or Alden fiddling away at an all-night old-time session. Since 2002, when the band was formed, the Luminescent Orchestrii has toured the East Coast, England, Scotland, and Germany.

This album is available from Nonesuch in the world outside of France. 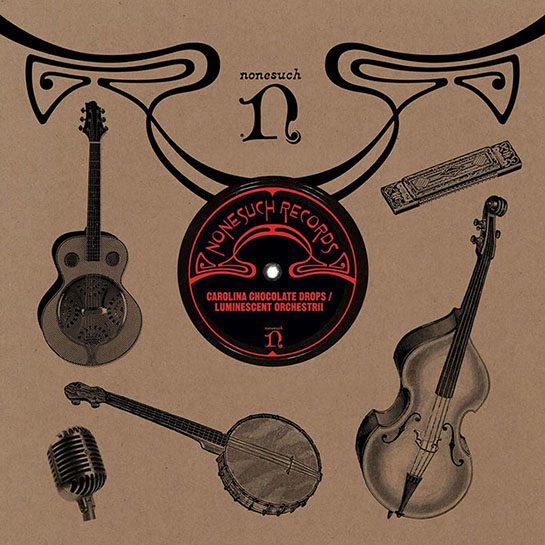