This first recording of Henryk Górecki’s final composition, Symphony No. 4, Tansman Episodes, was made during its 2014 world premiere at Royal Festival Hall with the London Philharmonic Orchestra conducted by Andrey Boreyko. The piece, which pays homage to composer Alexsander Tansman, was incomplete at the time of Górecki's death; his son Mikolaj, also a composer, used his father's precise indications for orchestration to complete it. "This swansong turned out to be extraordinary: playful, dramatic and tender," says the Boston Globe, "an ambitious, hypnotic work." Gramophone calls it "a powerful and personal farewell from one of the 20th century’s most distinctive voices."

Nonesuch Records released the late Henryk Górecki’s final composition, Symphony No. 4, Tansman Episodes, on January 22, 2016. The recording was made during the 2014 world premiere performance at Royal Festival Hall with co-commissioner London Philharmonic Orchestra conducted by Andrey Boreyko. The piece, which pays homage to Górecki’s fellow Polish composer Alexsander Tansman, was incomplete at the time of Górecki’s 2010 death and thus missed its previously scheduled premiere. However the score had precise indications for orchestration, which Górecki’s son Mikolaj, also a composer, used to complete it. The Daily Telegraph said the piece "caps Górecki's reputation as an orchestral composer, but it also contains some surprises. The music … features some brutal juxtapositions of massively powerful music with slow, intimate passages for solo instruments, including prominent parts for piano and organ."

Born in 1933, Henryk Górecki spent most of his life in southern Poland. He was a leading composer of the Polish avant-garde in the 1950s and later reached a worldwide audience in the 1990s thanks to the success of his Symphony No. 3. The work was composed in 1976, and was at that time shocking in its tonality and simplicity, but it was with the release of the 1992 Nonesuch recording of the piece, featuring Dawn Upshaw and the London Sinfonietta, that it attracted international attention, selling more than a million copies and climbing to the top of the classical music charts in both the US and the UK. On the unexpected popularity of the piece, the composer remarked, "Perhaps people find something they need in this piece of music ... somehow I hit the right note, something they were missing. Something somewhere had been lost to them. I feel that I instinctively knew what they needed."

The London Philharmonic Orchestra was founded in 1932 by Sir Thomas Beecham. Since then, its principal conductors have included Sir Adrian Boult, Sir Georg Solti, Klaus Tennstedt, and Kurt Masur. In 2007, Vladimir Jurowski became the Orchestra’s principal conductor. The London Philharmonic Orchestra has been performing at Southbank Centre’s Royal Festival Hall since it opened in 1951, becoming resident orchestra in 1992. It also has residencies in Brighton and Eastbourne, and performs regularly around the UK. The Orchestra frequently tours abroad: highlights of the 2014–15 season included appearances across Europe, including Iceland, and tours to the USA (West and East Coasts), Canada, and China. The Orchestra broadcasts regularly on television and radio, and has recorded soundtracks for numerous films including The Lord of the Rings. In 2005 it began releasing live, studio, and archive recordings on its own CD label.

Symphony No. 4 received its US premiere in January of this year, by co-commissioner Los Angeles Philharmonic, and was performed in February by the Netherlands Radio Philharmonic Orchestra at the Concertgebouw (which is home to the piece’s third co-commissioner, the ZaterdagMatinee concert series). This recording was supported by the Adam Mickiewicz Institute as part of the Polska Music program. 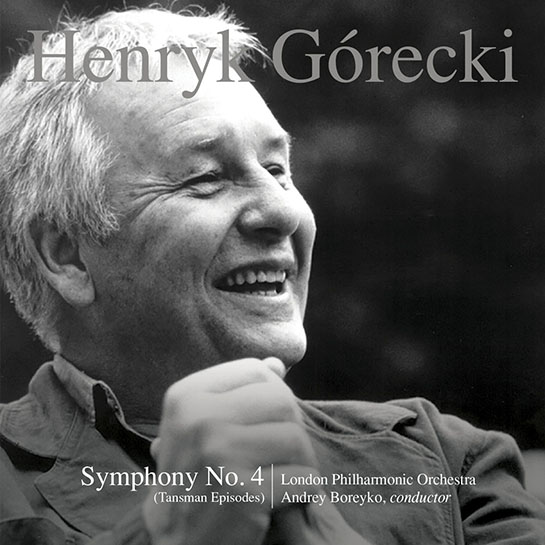