On Gomidas Songs, Isabel Bayrakdarian's first album for Nonesuch Records, the Armenian-Canadian soprano examines the legacy of Gomidas Vardabet (born Soghomon Soghomonian, Keotahia, Ottoman Empire, 1869), a well-traveled composer who made it his life’s work to seek out, transcribe, and re-interpret the ancient liturgy, songs, lullabies, hymns, and folk dances of his Armenian homeland. Bayrakdarian performed concerts that include Gomidas’s music following the album's release in the fall of 2008, including a date at Carnegie Hall’s Zankel Hall.

The album was recorded at the Aram Khachaturian Philharmonic Hall in Yerevan, Armenia, with the Chamber Players of the Armenian Philharmonic Orchestra conducted by Eduard Topchjan. All of the songs were arranged and orchestrated by scholar and pianist Serouj Kradjian, Bayrakdarian’s concert partner and husband—who also plays on the record. This recording was made possible by a generous contribution from the AGBU (Armenian General Benevolent Union) and Louise Manoogian Simone.

Bayrakdarian, who was born in Lebanon to Armenian parents, first performed Gomidas’s music as part of the score to Canadian-Armenian director Atom Egoyan’s 2002 Ararat—a multi-layered drama about contemporary filmmakers attempting to dramatize and come to terms with the Armenian genocide of 1915, which left Gomidas emotionally devastated and put an end to his life as a composer. (His name was changed when he took monastic vows; was ordained a “Vartabed,” or celibate priest; and, as is the practice in the Armenian Church, assumed a new name, Gomidas.)

Isabel Bayrakdarian is highly regarded for her opera performances, on stage and on record—particularly as Cleopatra in Handel’s Giulio Cesare and in Mozart works like Don Giovanni and The Magic Flute. Her voice, says Time, “combines lyricism with remarkable dramatic instincts,” and the Chicago Tribune praised her “full, gleaming soprano and fine musical intelligence.” Bayrakdarian made her Metropolitan Opera debut in William Bolcom’s A View from the Bridge.

Gomidas Songs contains love songs, devotional songs, evocations of nature, children’s songs, lamentations, and comic songs. Egoyan contributes liner notes to the album package, illustrating the importance of Bayrakdarian’s undertaking: “The strength of any culture resides in its ability to preserve, cherish, reinvent, and grow. This was the gift that Gomidas gave to his people, and this is the gift which Isabel has revealed and brought to the world.”

Included with Gomidas Songs in the Nonesuch Store are two exclusive bonus downloads, the songs "Dsidsernag" and "Hayasdan."

All songs by Gomidas Vardabet; arranged and orchestrated by Serouj Kradjian. This recording was made possible by a generous contribution from the AGBU and Louise Manoogian Simone. 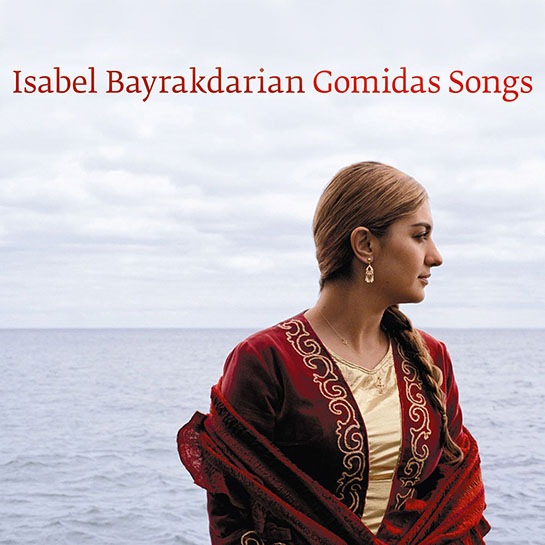