Portuguese singer Mariza's album Mundo earned her the Songlines Best Artist of the Year award following its international release in 2015. The album features both new material and classics by Amália Rodrigues, Carlos Gardel, and more. "Mundo was an unalloyed triumph," says Songlines, "her artistry hitting dynamic new heights and her voice expressing every emotional nuance, whether singing a gentle and intimate lullaby for her young son or melodramatically letting rip on the high notes with the force of an operatic diva."

Nonesuch Records releases Portuguese singer Mariza's newest album, Mundo, in the United States on September 9, 2016. Mundo, which is the Portuguese word for "world," was released internationally last fall to critical acclaim. Songlines named Mariza its Best Artist for the year and called her album "not so much a reinvention as a bold expansion of her role as fado's foremost global ambassador. Adding sparkling pop ballads and subtle washes of electronica to her traditional roots, Mundo was an unalloyed triumph, her artistry hitting dynamic new heights and her voice expressing every emotional nuance, whether singing a gentle and intimate lullaby for her young son or melodramatically letting rip on the high notes with the force of an operatic diva."

Mundo follows Mariza's 2011 release, Fado Tradicional, which London's Daily Telegraph called "a stripped-back album of the genre's classics, accompanied by guitar and a touch of bass," adding that "the vocal poise and the sense of effortlessness are, as always, hugely impressive."

Mariza first entered the international music scene with her 2001 debut album, Fado em Mim, which became a runaway success. Four other studio albums and three live recordings followed, along with a best-of disc, countless international tours and concerts in some of the most prestigious venues around the world, and many awards and accolades.

With the songs on Mundo, Mariza joins all of these experiences and travels, along with recently becoming a mother. Opening track "Rio de Mágoa" is a classic fado that establishes who Mariza is and where she came from, before moving to new material written by her producer, the Spaniard Javier Limón, and classics by the legendary Amália Rodrigues and the storied tango singer Carlos Gardel. She considers Mundo not a worldwide travelogue, but a journey across her life, her influences, her soul, and her spirit. Many of its songs were written specifically for Mariza's voice; among the exceptions are a cover version of a 1930 tango originally sung by Carlos Gardel ("Caprichosa"); one fado made famous by Amália Rodrigues ("Anda O Sol Na Minha Rua") and another created by the renowned Alfredo Marceneiro ("Maldição"); and a Cape Verdian morna ("Padoce de Céu Azul").

Mariza, whom Uncut calls "the greatest contemporary singer of fado," is the most successful performer in the genre since the late Amália Rodrigues. She has sold more than a million copies of her recordings worldwide and has a total of more than 30 Platinum awards. Her albums are released in more than 30 countries; all of the albums have reached #1 in Portugal and have made top-ten lists in many other countries.

PRODUCTION CREDITS
Produced and Arranged by Javier Limón
Recorded and Mixed at Studio Casa Limón by Salomé Limón, except track 14 and acoustic bass on tracks 6 and 10 recorded at Vale de Lobos Studios by Pedro Vidal
Mastered at PKO Studios by Caco Refojo

Photography by Carlos Ramos
Styling by Filipe Carriço
Design by Labdesign
Translations by Ivan Moody, except track 7 by Carla Vieira. Translations have been made without literary pretense. 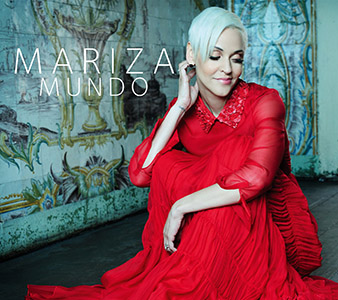