A song cycle on the subject of faith and longing in a secular world, Adam Guettel's Myths and Hymns offers up a dazzling array of songs adapted from classic Greek myths and the texts of an early American hymn-book. The New York Times described it as "lofty but accessible and intensely passionate." Time called it "a major event in American popular song."

With Myths and Hymns, his second album for Nonesuch Records, composer/lyricist Adam Guettel continues to reconfigure the landscape of American theater music.

Released by Nonesuch in 1997, Adam Guettel’s Floyd Collins announced the arrival of a new creative voice in American music, theatrical or otherwise: “The original and daring musical of our day,” according to John Simon at New York magazine. Myths and Hymns revealed the virtuosic variety of that voice, further exploring Guettel's musical imagination.

Myths and Hymns is a song cycle on the subject of faith and longing in a secular world. Premiered in March 1998 at the Joseph Papp Public Theater / New York Shakespeare Festival under the title Saturn Returns, the work offers up a dazzling array of songs adapted from classic Greek myths and the texts of an early American hymn-book.

This incandescent hybrid of concert and theater music was lauded by New York Times critic Stephen Holden who wrote, in reviewing Saturn Returns, "Mr. Guettel lets his influences tumble over each other in musical somersaults that breach the boundaries of conventional song structure ... He has created a kaleidoscopically heady musical-theater piece in which Gabriel Fauré meets Stevie Wonder, Caetano Veloso embraces Earth, Wind and Fire, and they all dance together around the tribal hearth."

The evolution of Myth and Hymns commenced for Guettel in 1987, when the line “Icarus was not an achiever” entered into his thoughts. This idea inspired Guettel to write “Icarus,” and to seek out other myths. He began writing songs that directly addressed the fates of, among others, Icarus, Pegasus and Sisyphus. It was not until six years later, when Guettel chanced upon a 19th-century Presbyterian hymnal in a used bookshop, that he became interested in hymns. He later told Stagebill magazine that this discovery rendered "an actual physical response, an uncharacteristic outpouring of creativity." Not at all certain what these two distinct groups of songs represented, Guettel played them for his Floyd Collins director Tina Landau, who suggested uniting the two into a single work under the title Myths and Hymns.

An early version of the work, presented at the New Lyric Festival in Northampton, Massachusetts, in the summer of 1996, followed by two workshops at the Public Theater, helped sharpen this focus and resulted in Guettel's re-titling the piece Saturn Returns for its 1998 world premiere at the Public Theater.

A reference to the completion of Saturn's 29-year cycle around the sun, this return of Saturn is thought to be, as Guettel pointed out in his own program note for the show, "for many of us, a time of profound reassessment. What have I done with this first cycle of my life? Who have I become?"

The songs that comprise Myths and Hymns are an intricate interweaving of pop and theatrical styles. From Guettel's reanimation of the myth of "Icarus," to the gallows humor of "How Can I Lose You?", the show is filled with Guettel's "long-lined melodies that seem to go on and on as they reach for the moon and stars, pivoting on offbeat chromatic harmonies that are as unpredictable as they are unabashedly romantic,” as Stephen Holden observed in the New York Times. One of the songs, “Come to Jesus,” was recorded by Audra McDonald, in a duet with Guettel, for her best-selling 1998 debut album, Way Back to Paradise, and prompted TIME magazine to dub Guettel “a startlingly original songwriter.”

"We must treasure a composer of Mr. Guettel's unusual gifts," wrote Martin Gottfried in his review of Saturn Returns. "The talent is there," added Stephen Holden in the Times, "and it's major." 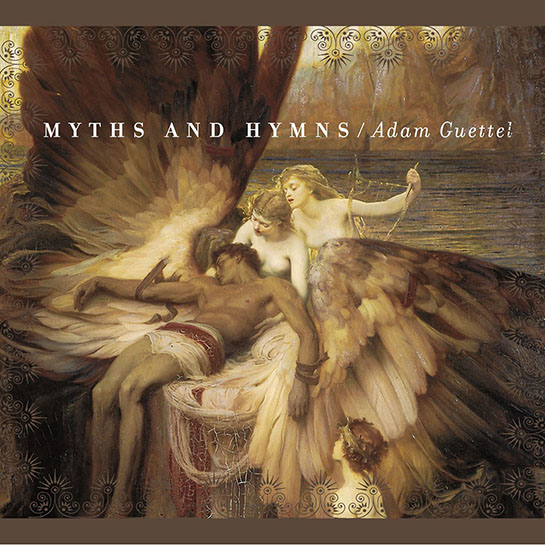