Nomad, Tuareg guitarist, singer, and songwriter Bombino's Nonesuch debut album, was produced by The Black Keys’ Dan Auerbach. NPR calls the pairing "inspired," noting that Bombino's "sound and style are alluring on a global scale." NPR's All Things Considered says it's "a landmark in African rock music." The Los Angeles Times says "anyone who has ever appreciated a master player make magic on a Fender ... will find comfort in Bombino’s music." Rolling Stone says: "A perfect match of sound and soul, the set introduces a new guitar hero, and confirms Auerbach’s arrival as a roots-music producer to be reckoned with." The BBC calls it "utterly, utterly fantastic."

Nonesuch Records releases Nomad, from the Tuareg guitarist, singer, and songwriter Omara “Bombino” Moctar, on April 2, 2013. At the invitation of The Black Keys’ Dan Auerbach, the Niger-born artist and his band traveled to Nashville for the recording, helmed by Auerbach at his studio, Easy Eye Sound. The LP is pressed on 140-gram vinyl.

Before 2009, Bombino was little known outside Saharan Africa, where his career consisted of regionally available cassettes and roles in local bands. In the last few years, he has begun to find a following abroad. He sold out venues across the US in his first tour here, in 2011, and has garnered the praise of outlets ranging from Pitchfork to NPR’s Fresh Air, whose critic Milo Miles called Bombino “a young performer with the charisma and probing imagination to become the first Tuareg star.” Auerbach became a fan after a friend saw him perform and thought Auerbach might appreciate his unique style of desert blues.

Born and raised in Niger, in and around the northern city of Agadez, Bombino is a member of the Tuareg Ifoghas tribe, a nomadic people descended from the Berbers of North Africa. The Tuareg people have fought the Niger government to secure their rights on numerous occasions, causing Bombino and his family to flee several times. During one such exile, relatives visiting from the front lines of the rebellion left behind a guitar and Bombino began teaching himself to play it. He eventually studied with the renowned Tuareg guitarist Haja Bebe, who asked him to join his band, where he acquired the nickname Bombino—a variation on the Italian word for “little child.”

While living in Algeria and Libya in his teen years, Bombino’s friends played him videos of Jimi Hendrix and Mark Knopfler, among others, which they watched over and over in an effort to master their licks. Bombino worked regularly as a musician and also as a herder in the desert near Tripoli, spending many hours alone watching the animals and practicing his guitar. Eventually, Bombino returned to Niger, where he continued to play with a number of local bands. As his legend grew, a Spanish documentary film crew helped Bombino record his first album, Group Bombino’s Guitars from Agadez Vol. 2, which became a local radio hit.

In 2009, Bombino met filmmaker Ron Wyman, who had heard a cassette of Bombino’s music while traveling near Agadez. Wyman was enchanted by Bombino’s music and spent a year seeking him out, eventually tracking him down to Ouagadougou, Burkina Faso, where he was in exile after two band members were killed in a rebellion. (The Tuaregs have since put down their arms and returned to Niger.) Wyman featured Bombino in a documentary he was filming about the Tuareg and also produced his 2011 solo album, Agadez.

Writing about Bombino’s 2011 album Agadez, NPR Music praised the artist’s “sublime guitar licks,” which Pitchfork has described as “scorching.” The BBC has said, “[Bombino’s music] holds hidden power beneath its deceptive simplicity, with many a tune devolving into blistering guitar jams, following chanted vocals about the struggle for unity and self-determination, as well as the longing that love brings, and the difficulties facing a life of shepherd’s solitude.”

Design by Perry Shall 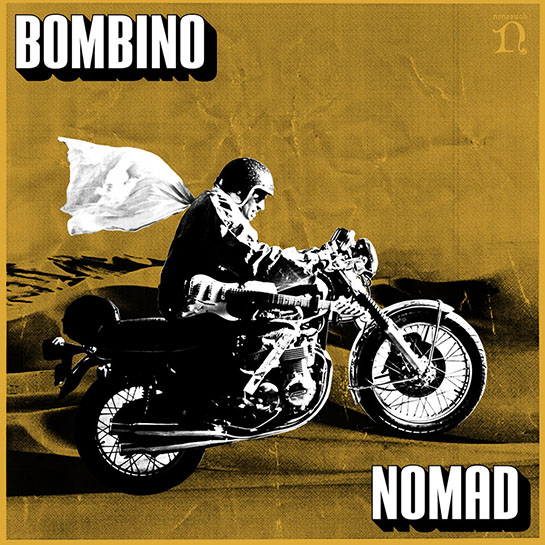