The Rough Dancer and the Cyclical Night

Originally released in 1989, Astor Piazzolla’s The Rough Dancer and the Cyclical Night was recorded in New York in September 1987, with an ensemble that included Fernando Suárez Paz (violin), Pablo Zinger (piano), Paquito D’Rivera (alto sax, clarinet), Andy González (bass), and Rodolfo Alchourrón (electric guitar). The recording was produced by Kip Hanrahan and originally released by American Clavé. It is the third Nonesuch reissue of Piazzolla’s classic American Clavé recordings, which also include Tango: Zero Hour and La Camorra. The music of The Rough Dancer and the Cyclical Night was commissioned by Intar Hispanic American Arts Center for their production of Tango Apasionado, which included lyrics by William Finn. That work was adapted by Graciela Daniele and Jim Lewis, and was conceived, choreographed and directed by Graciela Daniele.

Astor Piazzolla’s nuevo tango, which incorporates classical forms and jazz elements into the traditional tango, was so controversial at its advent that Piazzolla had his life threatened on numerous occasions and was even exiled from Argentina. The traditional tango, born out of the bordellos of Buenos Aires in the way that jazz began in New Orleans, had been haunted by its origins for decades. Piazzolla, with his innovative style and desire to legitimize the tango and bring it to a serious musical audience, changed the face of the music forever.

The release of The Rough Dancer and the Cyclical Night in 2000 marked the fifth Nonesuch release to feature Astor Piazzolla. It was preceded by the 1999 release of the La Camorra (1987), preceded by 1998 release of the 1986 classic recording Tango: Zero Hour, with new liner notes and packaging. In 1988, a recording of Piazzolla’s Concierto para bandoneón and Tres tangos was released, and in 1990 he made his last recording, Five Tango Sensations, which was commissioned by the Kronos Quartet. (Piazzolla’s first composition for Kronos, Four, for Tango, appears on their 1988 release Winter Was Hard.) The music of Piazzolla is also featured on three Nonesuch recordings by the violinist Gidon Kremer: Eight Seasons, Hommage à Piazzolla, and El Tango.

All music written by Astor Piazzolla 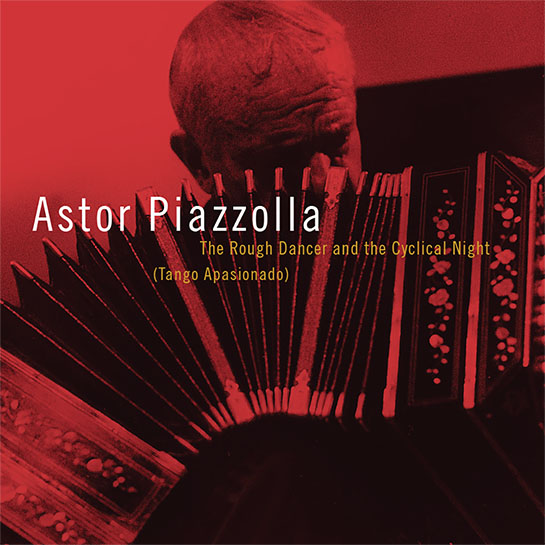