Burnett's recording approach has evolved over decades of distinctive work, both as a recording artist in his own right, like on his 2008 Nonesuch debut, Tooth of Crime, and in guiding an elite roster of artists and movie music projects, from the O Brother, Where Art Thou? soundtrack to the Robert Plant / Allison Krauss collaboration, Raising Sand—forming one of the most productive, distinctive, and lauded production careers of modern music.

Don’t fret. T Bone Burnett hasn’t gone off the deep end. At least not in that way. He’s merely explaining the tone of “Anything I Say Can and Will Be Used Against You,” the put-you-on-your-heels opening track of his gripping new album, Tooth of Crime (Nonesuch). At once seductive and unsettling—from the haunting “Dope Island” (featuring alluring vocals by Sam Phillips) to oddly romantic “Kill Zone” to the brutal “The Rat Age” to the atmospheric “Telepresence” to the hill-country blues elegy that closes the tale, “Sweet Lullaby”—it’s a set of songs capturing a state of identity and cultural dislocation with an air that could be termed dramatic, even theatrical in places. Fittingly.

The album—completed fresh off Burnett’s stunning work as producer and arranger of the hugely successful Robert Plant / Allison Krauss collaboration, Raising Sand—is a vibrant outgrowth of a long-running collaboration with playwright Sam Shepard that began with the 1996 musical staging in New York of his noted play Tooth of Crime (Second Dance). The songs are arresting distillations of modern conflicts and personal drama in a modern hyper-reality. The arrangements are imaginative and inventive. The performances are stunning, masterly, and unpredictable.

And that opening song sets the stage—sort of an update of Bo Diddley’s menacing macho-mythos “Who Do You Love?”

Following Burnett’s highly acclaimed 2006 album The True False Identity —itself a dynamic return to action after a 14-year hiatus as a recording artist—this new collection is itself the realization of years of work to fully capture the inspiration of Shepard’s forceful ideas.

“Tooth of Crime is a prophetic play that Sam first wrote in 1972, and it takes place in a time very much like now,” Burnett explains. “It’s a time when there are zones of fame that flare up and people can become incredibly famous in their own zones and nobody outside that zone can know anything about it. When the zone completely disappears, the famous person doesn’t realize it, the only way to even find the zone being to hook up a toaster to a television to a microwave to a piano, then possibly you can tune it in. That was the initial inspiration for the album. And now that I’ve said it, I wish I’d made it ramshackle like that!”

Not that making the recordings was at all straightforward.

“These songs came together like a broken mirror—you get a lot of shards and start putting them together and create a lot of different angles,” he says. “That’s this group of songs, this process.”

Working with what has become a solid musical team anchored by Marc Ribot (Tom Waits, Elvis Costello, John Zorn) and drummer Jim Keltner (John Lennon, George Harrison, Eric Clapton, et al.), Burnett crafted the sound of Tooth of Crime into a unique aesthetic. It’s an approach that has evolved over decades of distinctive work for Burnett, both as a recording artist in his own right and in guiding an elite roster of artists and movie music projects: The 2000 Grammy Album of the Year O Brother, Where Art Thou? soundtrack; the Oscar-nominated “The Scarlet Tide” for the film Cold Mountain (for which he also produced the soundtrack); albums by Bob Dylan, Elvis Costello, Los Lobos, Roy Orbison, Ralph Stanley, Tony Bennett, and k.d. lang; and recent projects such as Raising Sand, the re-imagining of the Beatles catalogue in Across the Universe, and the music for the Johnny Cash biopic Walk The Line, are just highlights of a resume that stands as one of the most productive, distinctive, and lauded production careers of modern music.

“We’ve got a custom shop over here and we sort of do what they do on Monster Garage but with sound,” he says of his recording studio. “‘Let’s turn this pickup truck into a golf cart or something.’ We’ve been experimenting with it for ten years, the same team of people. It’s gotten more and more interesting as everybody brings more and more to the party each time.”

Burnett himself kind of laughs when looking back over how he got here.

“I was in two bands when I was young and was totally the worst guy in both bands. And none of the other guys are playing music anymore. There are probably millions of people who were better than I was.”

Ultimately, though, it’s pretty simple. “I believed in it,” he says, by way of explaining his reaching this point. “I actually believed in the power of music. That’s probably it.”

That has indeed been it since Burnett started his professional music career as a Texas teenager. Moving to Los Angeles in the early 1970s, he came to national attention as a member of Bob Dylan’s Rolling Thunder Revue band, out of which he formed the Alpha Band with David Mansfield and Steven Soles. The group made three acclaimed if underexposed albums before Burnett went solo with the arresting Truth Decay in 1980, followed by the Trap Door EP (1982), Proof Through the Night (1983), the Behind the Trap Door EP (1984), an acoustic collection T Bone Burnett (1986), The Talking Animals (1988), and The Criminal Under My Own Hat (1992). Highlights of these releases were collected on the 2006 two-disc set Twenty Twenty—The Essential T Bone Burnett. Through that time he became one of pop music’s most renowned producers with such work as Los Lobos’ How Will the Wolf Survive? and Costello’s King of America. 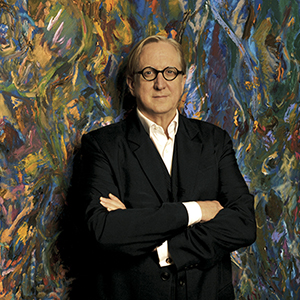