Ghana: High-Life and Other Popular Music

Drums and gourds share the stage with saxophones, vibes, and a bass fiddle to create what the New York Times called “an album of ebullient Ghanaian pop.” Calypso and blues mix with urban arrangements of traditional African work songs, as American jazz and popular music were first making their return to Africa and influencing the music that gave birth to them.

Originally released in 1969 as Voices of Africa: High-Life and Other Popular Music (H-72026)

In order to provide a historical context for this recording, the liner notes that accompanied its original release have been reprinted in full below. The text has not been edited to reflect changes in general cultural perceptions or specific factual information that may have occurred since then. —Ed.

In this album, Saka Acquaye and his African Ensemble present a small sampling of the fascinating music of modern Africa. This is not an “ethnic” recording – rather, a unique opportunity to hear the popular, dance hall, and concert music of Africa today. Imagine yourself in one of the many nightclubs or dance halls of Accra, capital of Ghana. The orchestra is a highly spirited combo of eleven young musicians utilizing both native African instruments and the jazz instruments of America and Western Europe: drums and gourds share the stage with saxophones, vibes, and a bass fiddle. You hear African “calypsos” and “blues,” intermixed with urban arrangements of traditional African work songs and secular music. Some time during the evening, the orchestra settles itself down for an extended musical composition that would be classified by us as “modern serious music” – perhaps a tone poem or suite for African instruments. A young and vital nation is experimenting with new ideas and forms. This record captures the sound of a music in the making.

The new African nations have taken their place among self-governing peoples; that great cultural changes are occurring in these new nations is not surprising. In the “new” music coming out of Africa, the rich spontaneity and color of African life are magnified a hundred times. Americans have a vested interest in this movement, for their own musics – jazz, popular, dance, and religious – have drawn heavily upon African sources. Actually, the new African music is based solidly on traditional African musical expression, adapting elements from the music of the colonial powers that have governed these peoples. In different parts of Africa, as one would expect, these musical forms have taken diverse roads of development. For example, where drums and crossed rhythms have dominated, the newer musical forms are structured upon traditional drumming. In other districts, European stringed instruments have been adopted by native instrumentalists.

In a government-issued guide book to Ghana, one finds the remark that “enjoyment of life” and “love of laughter” characterize the people of this African republic. Nowhere is this more evident than in their music. Even their term for good-time music – “high life” – is indicative of this ability to laugh after a hard day’s labor. Their songs are full of their philosophy about life and a way of living. Proverbs and witty sayings, passed down traditionally for hundreds of years, are part of the everyday speech of Ghana and a mainspring for many of its cleverest songs. No shallow gutter-humor here – instead, time-tested truths, folk gems of one kind or another, are scattered generously throughout these songs.

Saka Acquaye and his African Ensemble furnish a striking example of present-day interaction between cultures. American jazz and popular music have now returned to Africa and are influencing the music that gave birth to them. 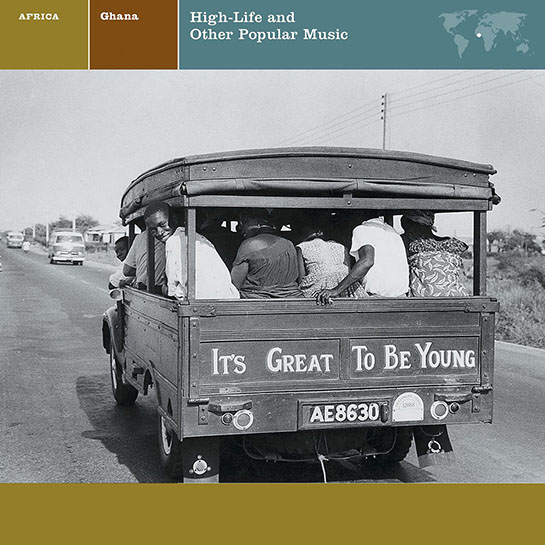