Zimbabwe: The Soul of Mbira / Traditions of the Shona People

The first of producer Paul Berliner’s two volumes of recordings of the mbira (a gourd-resonating thumb piano and a core instrument in Shona culture), this album, from 1973, features music for entertainment, meditation, and religious and ceremonial occasions.

Originally released in 1973 as The Soul of Mbira: Traditions of the Shona People of Rhodesia

In order to provide a historical context for this recording, the liner notes that accompanied its original release have been reprinted in full below. The text has not been edited to reflect changes in general cultural perceptions or specific factual information that may have occurred since then. —Ed.

These recordings were made during a period of dramatic political change in the history of Rhodesia, which led ultimately to the country's independence in 1980, and its subsequent renaming to Zimbabwe. Since the record's initial publication, a number of place names have been changed: the former capital, Salisbury, is now called Harare; Ft. Victoria is now called Masvingo; University of Rhodesia, now University of Zimbabwe; Mondoro, now represented as Mhondoro, Highfields as Highfield.

We regret the passing of a number of distinguished artists heard on this disc: Mubayiwa Bandambira, Erick and Mondreck Muchena, Justin Magaya, John Kunaka and Muchatera Mujuru, the latter two – repositories of knowledge about the mbira tradition – executed during the liberation war.


Mbira music is one of the most ancient and popular forms of music found throughout black Africa. Its myriad forms constitute a contribution of unique richness to the world’s music.

The mbira has always been essential to traditional Shona culture and its players held in high esteem, providing music not only for entertainment but also for the most important occasions, ranging from the coronation of chiefs to religious ceremonies. Today, while mbira players are professionals by the nature of their commitment and skill, they often have to supplement their income through other vocations. Of the artists heard here, Mr. Mude is an upholsterer and businessman; Mr. Mashoko works as a catechist for the Roman Catholic Church; Mr. Kunaka is a skilled blacksmith and carpenter.

The mbira is an instrument consisting of keys mounted over a bridge on a hardwood sound-board. Shona mbiras range in numbers of keys from eight to fifty-two. They are generally played inside large gourd resonators decorated with shells and (more recently) bottle tops. The gourds shape and amplify the sound of the mbira, and the shells provide a buzzing quality – an integral part of the music. A basic rhythmic accompaniment to the mbira is often provided by gourd rattles called hosho. In this album, four major mbira traditions are represented: the mbira dzavadzimu, matepe, njari, and ndimba. Their playing techniques range from the use of two thumbs to both thumbs and index fingers.

We are greatly indebted to the performers, whose love of mbira and conviction that mbira music holds universal meaning made these recordings possible. 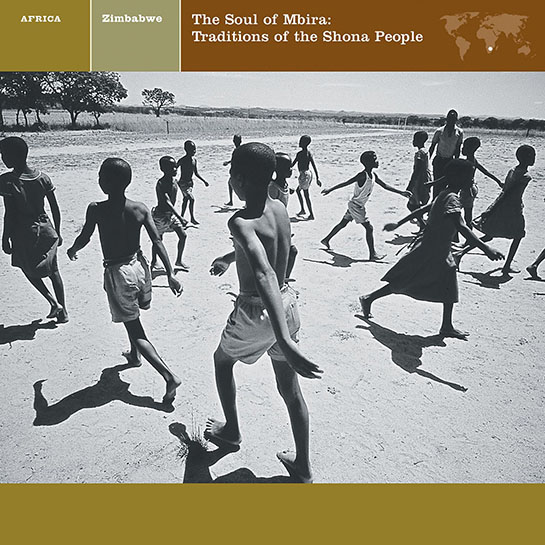