Zimbabwe: The African Mbira / Music of the Shona People

The mbira—a gourd-resonating thumb piano—is a core instrument in Shona culture first heard by many in the West on this 1971 recording, which features the playing and singing of the late Dumisani Abraham Maraire, later heard on Kronos Quartet’s groundbreaking Pieces of Africa.

Originally released in 1971 as The African Mbira: Music of the Shona People of Rhodesia (H-72043).

In order to provide a historical context for this recording, the liner notes that accompanied its original release have been reprinted in full below. The text has not been edited to reflect changes in general cultural perceptions or specific factual information that may have occurred since then.

These recordings were made during a period of dramatic political change in the history of Rhodesia, which led ultimately to the country’s independence in 1980, and its subsequent renaming to Zimbabwe. Regrettably, Dr. Abraham Dumisani Maraire, the principal importer of Shona musical culture to America in the 1970s and ’80s, passed away in November 1999. Until that time, he remained one of the leading educators in the field as the head of the Department of African Languages and Literature at the University of Zimbabwe in Harare.

Much of the instrumental and vocal music of East Africa has been described as repetitive and monotonous; apologists counter that the music is quite varied and exacting. Yet freed of pejorative connotations, the former is probably closer to what the African musician is striving for. There is a saying in East Africa that white men are often sick because they change what they eat so often; the African would say, “If you eat the same thing every day, at least you will know what killed you.”

Essentially, repetition and uniformity are regarded as aesthetic strengths in Africa rather than structural weaknesses. The Shona musician uses repetition as a means of establishing a line of predictability between himself and the listener. Variations are not employed as contrasts but as slight deviations that only serve to emphasize the overall mood or style of the piece. Changes and variations grow out of the overall pattern almost imperceptibly; each of these is then given time to “grow into” the piece before another is added. It is never the musician-composer who consciously creates new variations, or sections; rather, these must develop naturally out of the mood of the performance, the response of the listener to the music, or the interaction of the musicians with each other.

Throughout East Africa there is a great variety of instruments belonging to the mbira or likembe family. Among the Shona people, at least three different types are found. Each consists of a small wooden board onto which a number of metal keys have been attached; the number, thickness, and tonal arrangement of the keys are the major differentiating factors among these instruments. The keys are arranged in a staggered rather than scale-wise order, in order to make certain melodic patterns easier to play. The difference between one instrument and another is so great that a musician must be specifically trained to play each one.

The melody of the song and the basic mbira pattern are closely linked; the pattern usually consists of a few notes in the lower range of the instrument. These are repeated several times, and the vocal melody seems to grow out of them gradually. Both the vocal melody and the mbira continue to expand the collection of pitches, generally adding one note at a time. Each repetition suggests a new configuration of the existing pattern, and ultimately this new pattern begins to take hold. The music unfolds over the buzzing sound of the hosho – a rattle made out of a gourd with either seeds placed inside it or a net of beads encircling it. The seeds inside the gourd, or the net of beads, produce the instrument’s distinctive sound.

The hosho is very important in Shona and all other African music. Its roughness (as some might call it) arouses the performers, and provides rhythmical stimulation to both voice and mbira. In addition, the hosho player acts as conductor, and participates in the vocal performance, elaborating the lines sung by the mbira player. The singing of the hosho player tends to concentrate on non-verbal sounds; as singer, he is more concerned with designing and enriching the verbal statements of the mbira player, and also the tune of the piece that he will harmonize. All this is called kubvumira and kudzadisa. The difference between the singing of the hosho and mbira player is that the latter will have more to say verbally. (In some cases, though, they may all verbalize equally.) The relationship between the two singers may become quite complex, including the practice of kudaira or kuteererana – i.e., following each other in a kind of response pattern. The addition of a third voice, which has more freedom from the basic pattern, adds further textural richness.

In the musical life of the Shona, an audience in the Western sense does not exist. Everyone present is or must be in some way involved in the performance, whether by singing along or by body movement. But beyond this immediate function, the music exerts the kind of emotional power that stems from its deep underlying mysticism. 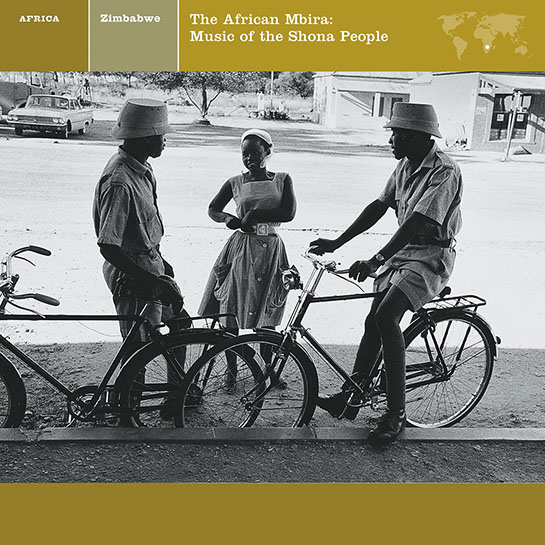