The Metropolitan Opera's performance of Alban Berg's Lulu is here on Blu-ray and DVD together in one package. The Met's production, directed by acclaimed South African visual artist William Kentridge, premiered in 2015 and starred Marlis Petersen in her final performances as Lulu, a role she has made "hers and almost hers alone" (Opera News). The performance seen here was recorded and broadcast live in movie theaters around the world as part of The Met: Live in HD on November 21, 2015. "A stunning and searing production," exclaims the New York Times. All-region NTSC.

Nonesuch Records releases the Metropolitan Opera's performance of Alban Berg's Lulu on Blu-ray and DVD together in one package (all-region NTSC) on October 28, 2016. The Met's new production, directed by acclaimed South African visual artist William Kentridge, premiered in 2015 and starred Marlis Petersen in her final performances as Lulu, a role she has made "hers and almost hers alone" (Opera News) in ten different productions over eighteen years. The New York Times called it "a stunning and searing production." Lulu was recorded and broadcast live in movie theaters around the world as part of The Met: Live in HD on November 21, 2015. You can watch the Met's trailer for the production above.

Berg's monumental opera, which he left unfinished when he died in 1935, had its posthumous premiere in its incomplete version in 1937, with the three-act version that has become standard premiering in 1979. The opera tells the tragic story of a young woman who, as a victim of a harsh society, torments a series of men by whom she is objectified, desired, abused, and eventually killed. "She's ungraspable, and a fantastic white canvas for the men to put their ideas on," says Petersen about her character, in an interview with Graham.

Berg adapted the libretto from Frank Wedekind's two Lulu plays, Erdgeist (Earth Spirit, 1895) and Die Büchse der Pandora (Pandora's Box, 1904). He wrote the music using the 12-tone style conceived of his teacher, Arnold Schönberg, but with a nod to Romanticism that makes it unusually accessible for something written by a Schönberg disciple. "Berg made it very tonal, actually, for us and also for the ears of the audience," says Petersen. "You don't hear the 12-tone music."

"Lulu is one of the great operas of the 20th century," says Kentridge, speaking on video about the production. "It's an opera that's about the fragility or the possibility or the fragmentation of desire…Ink is the primary medium of the production. Essentially [it's] the vehemence of a black brushstroke… trying to find some equivalent, visually, to the violence of the opera."

The stage production of Lulu was made possible by The Kirsh Family Foundation.
The Met: Live in HD series is made possible by a generous grant from its founding sponsor, The Neubauer Family Foundation.
Global corporate sponsorship of The Met: Live in HD is also provided by Bloomberg Philanthropies.
Major funding for Great Performances at the Met provided by Toll Brothers, America's luxury home builder®.
Additional funding provided by the National Endowment for the Arts, the Irene Diamond Fund, the Anna-Maria and Stephen Kellen Arts Fund, The Philip and Janice Levin Foundation, and The Agnes Varis Trust.
Lulu is a co-production of the Metropolitan Opera, Dutch National Opera, and English National Opera.
Tape and editing costs funded by Lloyd E. Rigler−Lawrence E. Deutsch Foundation and Dunard Fund USA.

MUSICIANS
Music by Alban Berg
Libretto by the composer, based on the plays Earth Spirit and Pandora's Box by Frank Wedekind 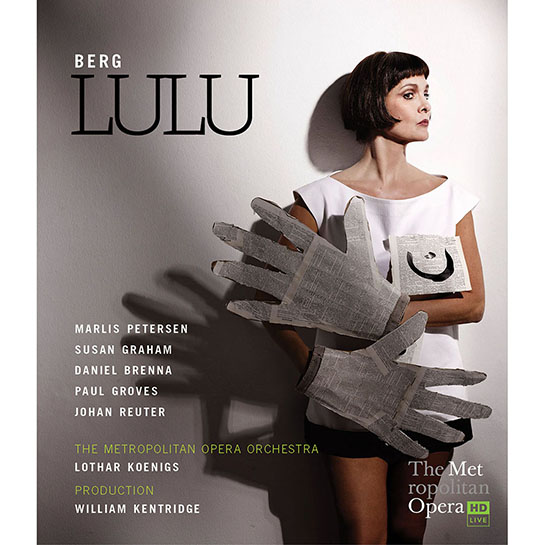 More From The Metropolitan Opera