The Metropolitan Opera’s performance of John Adams’ Nixon in China, with the composer conducting, is here on Blu-ray and DVD together in one package. The Met’s production, staged by Peter Sellars and first created by the English National Opera, stars James Maddalena as Richard Nixon, a role he originated. The performance seen here was broadcast live in movie theaters around the world as part of The Met: Live in HD on February 12, 2011, ten days after the opera received its Met premiere. "Here, on film, is the most influential American opera of the past quarter-century," says the Financial Times. "Future generations will see Nixon in China as the composer intended."

“The opera and the production may have come to the Met at just the right time to comprehend the continuing resonances of this audacious and moving opera.” —New York Times

Nonesuch Records releases the Metropolitan Opera’s performance of John Adams’ Nixon in China, with the composer conducting, on Blu-ray and DVD together in one package on November 19, 2012. The Met’s production, staged by Adams’ longtime collaborator Peter Sellars, stars James Maddalena as Richard Nixon, a role he created at the opera’s world premiere in 1987 and has since performed at international leading opera houses, including the English National Opera, Netherlands Opera, and Brooklyn Academy of Music. Nixon in China was recorded and broadcast live in movie theaters around the world as part of The Met: Live in HD on February 12, 2011—10 days after the opera received its Met premiere.

The opera’s libretto is by American poet Alice Goodman, who also collaborated with Adams and Sellars on The Death of Klinghoffer. The Met’s production, which was originally created by the English National Opera, features the work of the 1987 world premiere’s design team, including set designer Adrianne Lobel, costume designer Dunya Ramicova, lighting designer James F. Ingalls, and choreographer Mark Morris. Nixon in China also features Janis Kelly as Pat Nixon, Kathleen Kim as Chiang Ch’ing, Robert Brubaker as Mao Tse-tung, Russell Braun as Chou En-lai, and Richard Paul Fink as Henry Kissinger. Adams, who regularly conducts major orchestras around the world, made his Met debut as conductor with Nixon in China; his opera Doctor Atomic had its Met premiere in a well-reviewed 2008 production.

“I met Peter Sellars in 1983, and he proposed the idea and even the title for Nixon in China. My first response was pretty skeptical—Nixon was little more than a butt for late night comedians by that time,” Adams tells the Met’s Elena Park in an interview published in the Blu-ray/DVD’s booklet. “But I eventually realized it was a perfect idea, and that it was right to find our mythology in our own contemporary history.”

In the same interview, Sellars says of Nixon in China’s arrival at the Met: “It’s very sweet after 25 years. We created it as anti-grand opera originally, and now it’s beautiful that at the Met it can be genuinely grand. The work was made by a group of very young, very idealistic people. We were trying to show what opera can contribute to history, which is to deepen it and move it into its more subtle, nuanced, and mysterious corners, which might just open into more surprising and satisfying possibilities for a future.”

The Nixon in China Blu-ray/DVD is John Adams’ 27th Nonesuch release, beginning with Harmonielehre in 1986. The most recent release was 2011’s Son of Chamber Symphony/String Quartet.

Nixon in China is performed by arrangement with Hendon Music, Inc., a Boosey & Hawkes company, publisher and copyright owner. 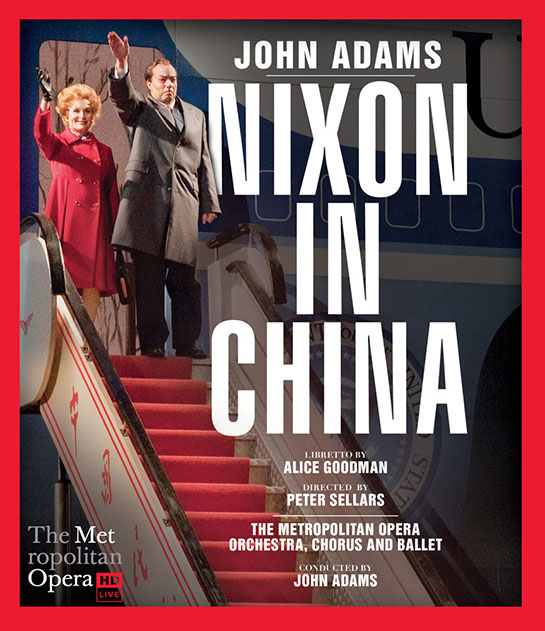