Nico Muhly’s opera, Two Boys was recorded live during the Metropolitan Opera’s 2013 production with conductor David Robertson and director Bartlett Sher, featuring mezzo-soprano Alice Coote and tenor Paul Appleby. The opera, featuring a libretto by award-winning playwright Craig Lucas, is loosely based on true events and follows a lonely detective whose investigation of a seemingly simple crime draws her into a complex web of online intrigue. The New Yorker praised Two Boys as a “bighearted, fearless work.” BBC Music Magazine lauds “Muhly’s radiant post-minimalistic score.” The Independent on Sunday calls it "enthralling." Opera magazine says this "excellent" recording confirms "the arrival on the operatic scene of a mature and striking new compositional voice."

Nonesuch released Nico Muhly’s opera Two Boys—recorded live during the Metropolitan Opera’s 2013 production with conductor David Robertson and director Bartlett Sher—on September 30, 2014. The two-act opera, which features a libretto by award-winning playwright Craig Lucas, is loosely based on true events and follows a lonely detective whose investigation of a seemingly simple crime draws her into a complex web of online intrigue. Alice Coote sings the role of Detective Inspector Anne Strawson and Paul Appleby sings Brian, the 16-year-old boy at the center of her investigations. The cast also features Jennifer Zetlan as Rebecca, Caitlin Lynch as Cynthia, Sandra Piques Eddy as Fiona, Judith Forst as Anne’s Mum, Christopher Bolduc as Jake, and Keith Miller as Peter. Two Boys is Muhly’s Nonesuch debut.

Vermont-born Muhly, 32, is the youngest composer ever commissioned by the Met, and Two Boys is his first large-scale opera. The New Yorker praised Two Boys as “bighearted, fearless work,” noting that “Muhly handles this lurid story with thoughtfulness and compassion: plaintive chorales and brooding ostinatos suggest the sadness and the loneliness lurking within the electronic global village.”

Two Boys, set in an English industrial city in 2001, combines two story elements rarely seen on the operatic stage: a police procedural and a dramatization of the mysterious and lonely lives of those who inhabit the dark corners of the Internet. “What was so exciting for me about this story, and what was so poignant is that we don’t live in a place where there are masked balls, really, anymore,” Muhly says of his inspiration for the opera. “So I thought the Internet—where you can really pretend to be another person—would actually be quite a traditional frame for an opera. I’d like to think Two Boys is both new and also very, very old.

“The choral music in Two Boys references the ecstatic vocal music of Meredith Monk and Steve Reich—the sense of overlapping vocal patterns creating a larger architecture of meaning,” Muhly continues. “It’s almost as if you’re hearing the entire aggregate of all the things that people are saying on the Internet at once.”

Muhly’s other recent projects include music for the Broadway production of The Glass Menagerie and the score to the film Kill Your Darlings. His other film credits include scores for Joshua (2007), Margaret (2009), and the Academy Award–nominated The Reader (2008). He has collaborated with a variety of artists, including Antony and the Johnsons, Björk, Bryce Dessner and Sufjan Stevens, Glen Hansard, Grizzly Bear, and Jónsi. Among Muhly’s most frequent collaborators are his colleagues at Bedroom Community, an artist-run label headed by Icelandic musician Valgeir Sigurðsson. In spring 2012, Bedroom Community released Muhly’s three-part Drones & Music, in collaboration with pianist Bruce Brubaker, violinist Pekka Kuusisto, and violist Nadia Sirota.

The Metropolitan Opera
Orchestra and Chorus 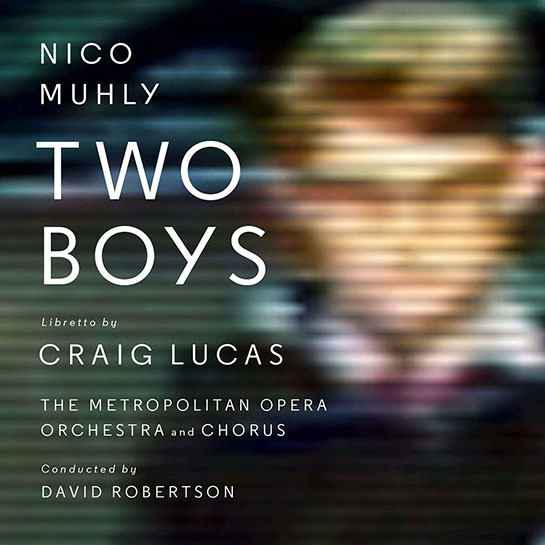