Rokia Traoré's Né So (Home), produced by John Parish (PJ Harvey, Tracy Chapman), comprises 10 original songs plus a cover of Billie Holiday's "Strange Fruit" and features guest performances by John Paul Jones and Devendra Banhart, along with Burkinabe drummer Moïse Ouattara, Ivorian bassist Matthieu N’guessan, and Malian ngoni player Mamah Diabaté. NPR calls Né So a "gorgeous new album" from a "fantastically gifted" artist. The Times says: "Traoré has made the album of her career." Uncut raves: "Brave, challenging and arrestingly original, Traoré may just have gone and made the finest indie-rock album to emerge from arguably the world's most musical continent."

Traoré had always been a traveler, but in 2009, she decided to move back to Mali. Three years later, she bore witness as her country's civil war gained terrible momentum. "Experiencing life in a war-torn country was traumatic. I became aware of how naïve I had been," she confesses.

She had left Bamako for a while and moved to Europe with her young son while simultaneously experiencing personal difficulties. "Everything was falling apart," she says. "It's never easy to go through tough times, but it is also what makes you grow, and understand why you cling to certain things and give up on some others."

Traoré started by writing and composing the songs alone. She then rehearsed in Bamako and recorded in Brussels and Bristol with musicians from the entire West African region. "I didn't want an all-Malian band. I need variety; I need a mix of cultures around me," she said. "You could say that Mali is where my roots are—it is where I take refuge in times of doubt, and where I accept risks when I must. Bamako was the place where I felt I would be both free and supported."

Traoré has explored a breadth of directions in her career. She recently collaborated with Nobel Prize–winning novelist Toni Morrison and director Peter Sellars on the theater piece Desdemona. The Guardian called it "a remarkable, challenging and bravely original new work." And in 2013, London's Barbican produced a three-night series of shows by Traoré, entitled Donguili – Donke – Damou (Sing – Dance – Dream).

Traoré was awarded the inaugural Roskilde Festival World Music Award in 2009 for her work with Foundation Passerelle, and in August 2013 the French government honored her with the distinction of Officer of the Order of Arts and Letters (Officier de l'Ordre des Arts et des Lettres), recognizing her significant contributions to the arts. In 2015 she was a jury member at the Festival de Cannes. Traoré's artistic collaborators have also included Kronos Quartet and Damon Albarn.

Her label debut, 2009's Tchamantché, won an award at the Victoires de la Musique (the equivalent of a Grammy Award in France) and a Songlines Artist of the Year Award for Traoré. Beautiful Africa debuted on the Billboard World Music Charts at #1. Uncut described it as "the record fans of [Traoré's] explosive live shows always hoped she would make; a career highpoint."

This album is available from Nonesuch Records for the world outside of Italy. 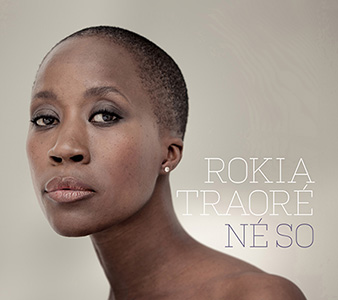