Peter Pears: Balinese Ceremonial Music is nine songs written by Thomas Bartlett (aka Doveman) and Nico Muhly plus three gamelan transcriptions by ethnomusicologist Colin McPhee, which inspired the new songs. Bartlett and Muhly play pianos and keyboards on the album, and Bartlett sings, joined by other musicians on strings and metallic pitched percussion. McPhee recorded a suite of Balinese ceremonial music with Benjamin Britten in 1941. Muhly says: "The project is named after Peter Pears, who was Britten's partner and also an observer and collaborator of a larger community of musicians, writers, and thinkers."

Longtime friends and collaborators Thomas Bartlett (aka Doveman) and Nico Muhly released a new album, Peter Pears: Balinese Ceremonial Music, May 18, 2018, on Nonesuch Records. Peter Pears comprises nine songs written by the duo plus three gamelan transcriptions by ethnomusicologist Colin McPhee that inspired the songs. Bartlett and Muhly perform the Peter Pears music on May 24 at (le) poisson rouge in New York City as part of its tenth anniversary festival, June 6 at the National Concert Hall in Dublin, and June 8 at LSO St Luke's in London presented by the Barbican.

McPhee lived in Bali during the 1930s, where he studied the gamelan intensively, bringing its sounds with him back to the Americas as one of the first composers to incorporate "world music" into his work. Returning to New York, McPhee moved in a group of artists that lived at 7 Middagh Street in Brooklyn. Alongside W.H. Auden, Carson McCullers, and Gypsy Rose Lee, he found the collaborator with whom in 1941 he would record his westernized transcriptions, for two pianos, of the ceremonial music he had heard in Bali: the composer Benjamin Britten, who would himself travel to Indonesia, and drew heavily on its traditions in his own later works.

In college, Muhly and Bartlett became obsessed with these recordings and started writing music rooted in their textures and interlocking rhythms. The resulting nine songs reflects both artists' recent work—from Muhly's attempts to bridge the gap between post-minimalist composition and many other musical obsessions, to Bartlett's Oscar–nominated work with Sufjan Stevens for Call Me by Your Name. The project is named for Britten's partner, who also lived at 7 Middagh; accompanied Britten to Bali; and sang with a voice arguably as unusual as the one Bartlett deploys on this album. Pears was Britten's link to a wider community of artists; similarly, these songs feature a large cast of Bartlett and Muhly's regular collaborators on strings and metallic pitched percussion.

Bartlett says, "I wanted to not write in the same voice as I wrote Doveman songs, which is essentially "sad heartbroken boy who can barely muster the will to sing", and I was a little sick of that. I ended up going through baby books my mom has from when I was a little kid, finding strange things I had said, and building lyrics off of that—then folding in all of these references to different saints and things that seemed connected to Peter Pears, to Colin McPhee, to that world."

Muhly adds, "How integral the relationship is between someone's life partner and their music informs the lyrics too. McPhee's transcriptions are instrumental, so they don't really "mean" anything, but there's this matrix of connections that are both musical and emotional."

Thomas Bartlett, also known as Doveman, is an American pianist, singer, and producer. He has worked with many Nonesuch artists—including Sam Amidon, David Byrne, the Magnetic Fields, Mandy Patinkin, and Chris Thile—as well as Sufjan Stevens, Glen Hansard, The National, St. Vincent, Father John Misty, The Gloaming, Martha Wainwright, and others. Born in Vermont, Bartlett studied piano in London with Maria Curcio. As teenagers, he and Amidon formed the folk music band Popcorn Behavior (aka Assembly), and released three albums. Upon moving to New York, Bartlett began performing with Chocolate Genius and Elysian Fields. The first Doveman record, The Acrobat, was produced by Patrick Dillett, as was 2007's With My Left Hand I Raise the Dead. In 2008 Bartlett released a solo re-imagining of the Footloose soundtrack. The Conformist (2009), again produced by Dillett, featured members of The National, as well as backing vocals by Hansard, Wainwright, Norah Jones, Beth Orton, and Dawn Landes.

Nico Muhly is an American composer and collaborator whose influences range from American minimalism to the Anglican choral tradition. The recipient of commissions from The Metropolitan Opera, Carnegie Hall, St. Paul's Cathedral, the Philadelphia Orchestra, and others, he has written more than eighty works for the concert stage. Muhly is a frequent collaborator with choreographer Benjamin Millepied and, as an arranger, has paired with Joanna Newsom, Antony and the Johnsons, Sufjan Stevens, and The National. He has composed for stage and screen, with credits that include music for The Glass Menagerie and scores for the films Kill Your Darlings; Me, Earl and the Dying Girl; and The Reader. Born in Vermont, Muhly studied composition with John Corigliano and Christopher Rouse at The Juilliard School before working as an editor and conductor for Philip Glass. Muhly's previous Nonesuch recordings are the Metropolitan Opera's recording of his Two Boys and his collaboration with Teitur, Confessions. He lives in New York.

A playlist with much of the music Bartlett and Muhly have each collaborated on can be found on Spotify and Apple Music.

All photos are from A House in Bali by Colin McPhee and used by permission of the Colin McPhee Estate, except for pink image courtesy of Auke Sonnega
Design by Ben Tousley

All music by Thomas Bartlett and Nico Muhly except for: Gambangan, Pemoengkah, and Taboeh Teloe, which comprise Balinese Ceremonial Music (1934–1938) by Colin McPhee (1900–1964) 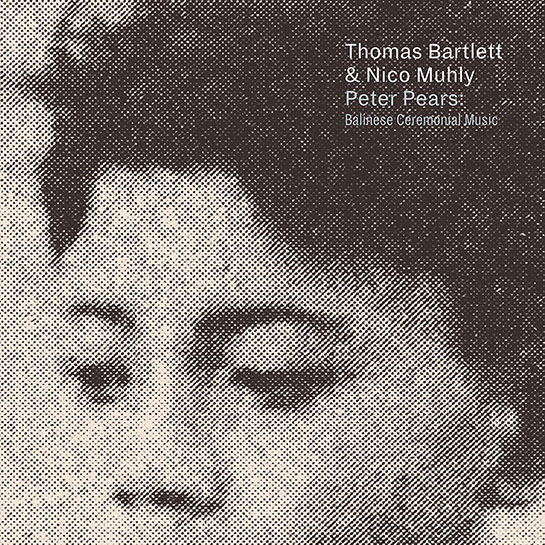