Pianist Fred Hersch has enjoyed a distinguished career as composer, arranger, bandleader, and performer. On Nonesuch, he released three "songbook" albums focusing on individual composers Billy Strayhorn, Rodgers & Hammserstain, and Thelonius Monk; a duo album with guitarist Bill Frisell; a live solo album; and a 3-CD set interpreting the music of Cole Porter, Duke Ellington, Thelonious Monk, Wayne Shorter, and others, as well as Hersch originals. Having arrived in New York from his native Cincinnati in 1977, Hersch has enjoyed longtime musical associations with Stan Getz, Toots Thielemans, Gary Burton, Charlie Haden, and Dawn Upshaw, among others. Hersch was an honors graduate of the New England Conservatory of Music, where he was later a faculty member for ten years.

An artist whose work “has developed an intensity of intelligence and emotional directness unparalleled among his peers” (The New Yorker), Fred Hersch has enjoyed a distinguished career as composer, arranger, bandleader, and performer. Hersch's many accomplishments include two Grammy nominations for Best Jazz Instrumental Performance and one for Best Instrumental Composition, and a 2003 Guggenheim Memorial Fellowship for composition.

Hersch has been widely recognized for his ability to re-invent the standard jazz repertoire, investigating time-tested classics and interpreting them with keen insight, fresh ideas and exceptional technique. This has been the focus of his acclaimed series of "songbook" releases, albums focusing on the work of a single composer. The first of these, 1995's I Never Told You: Fred Hersch Plays Johnny Mandel (Varese Sarabande), garnered Hersch his second Grammy nomination. Since signing with Nonesuch in 1995, Hersch has presented three more such projects: Passion Flower: Fred Hersch Plays Billy Strayhorn (1996) (an album featuring him as soloist, in a trio, and with a string orchestra), Fred Hersch Plays Rodgers & Hammerstein (1997), and Thelonious: Fred Hersch Plays Monk (1998) (both solo piano albums). Other notable recent albums include Focus (Palmetto), the second disc by the co-operative trio Thirteen Ways (with clarinetist Michael Moore and percussionist Gerry Hemingway), and the duo CD Songs We Know (1998) with guitarist Bill Frisell (Nonesuch). Hersch’s 1999 Nonesuch release, Let Yourself Go, a live solo performance at Boston’s Jordan Hall, received widespread critical acclaim. The Los Angeles Times called it "a tribute to Hersch's unerring ability to play music that is as intelligent as it is touching, as virtuosic as it is swinging."

On his most recent Nonesuch project, the 3-CD set Songs Without Words (2001), Hersch dedicates one disc to another songbook, interpreting the music of Cole Porter. The set also includes interpretations of tunes by Duke Ellington, Thelonious Monk, Wayne Shorter, and others, as well as a disc of Hersch's own original compositions. The three discs are primarily solo piano recordings, captured in the studio with the immediacy and intense concentration of a live performance; duo, trio, and quintet selections are interspersed for variety. Together they form a singular presentation of all the aspects of Hersch's multi-faceted artistry.

Increasingly in demand as a solo artist, Hersch has also led his own trio since 1986, giving voice to his own compositions as well as reinvigorating the standards. He has recorded seven albums with the trio and has appeared with the band in major clubs and festivals worldwide.

Upon arrival in New York from his native Cincinnati in 1977, Hersch quickly became an integral part of the local jazz scene. Since then he has enjoyed longtime musical associations with such artists as saxophonists Joe Henderson, Stan Getz, and Jane Ira Bloom, trumpeter Art Farmer, harmonica virtuoso Toots Thielemans, vibraphonist Gary Burton, bassist Charlie Haden, and clarinetist Eddie Daniels, and has also collaborated with such diverse vocalists as the Manhattan Transfer's Janis Siegel and soprano Dawn Upshaw.

In recent years Hersch has become a visible and passionate spokesman and fundraiser for AIDS research and relief agencies. On behalf of Classical Action: Performing Arts Against AIDS, he has recorded two benefit albums. Last Night When We Were Young: The Ballad Album has raised more than $125,000 for AIDS services and education. This was followed by Fred Hersch & Friends: The Duo Album, on which he played duets with 12 jazz legends including Tommy Flanagan, Joe Lovano, Diana Krall, Lee Konitz, Jim Hall, and Kenny Barron.

An honors graduate of the New England Conservatory of Music, where he was later a faculty member for 10 years, Hersch's classical training is "apparent in the fluency of his articulation and the timbral variety he brings to his touch," according to the Los Angeles Times.

In 1999, a new Hersch dance score, commissioned by the Doris Duke Foundation for the Bill T. Jones / Arnie Zane Dance Company, received its world premiere at the Kennedy Center in Washington, DC, and the American Dance Festival at Duke University. Hersch has been awarded a Rockefeller Fellowship, grants from The National Endowment for the Arts and Meet the Composer, and six composition residencies at The MacDowell Colony.

In addition to his 10-year tenure at the New England Conservatory, Hersch has taught at The New School and Manhattan School of Music and was a visiting lecturer at Princeton University in spring 2008. He is currently a visiting professor at Western Michigan University. 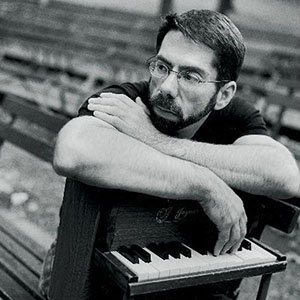