The soprano mines the catalogue of Broadway/classical composer Vernon Duke, reviving overlooked works and performing beloved numbers like "Autumn in New York."  The Chicago Sun-Times decided, "No one of her generation handles the Great American Songbook with Upshaw's care."

Dawn Upshaw’s 1994 music theater collection I Wish It So established the Metropolitan Opera soprano as a singular interpreter of music from the Broadway stage. That award-winning disc might have included the work of another unclassifiable composer, except that his wide-ranging output of undiscovered songs seemed to call out for its own album.

Vladimir Alexandrovitch Dukelsky (1903–69) was born into a White Russian family at a railway station near Minsk. He was dubbed Vernon Duke by his friend George Gershwin, who championed his work, along with Serge Koussevitsky, who commissioned his First Symphony.

Best remembered for “April in Paris” and “Autumn in New York”—heard here in orchestrations by Danny Troob and Jonathan Tunick—Duke lived and worked in New York’s theater heyday, while also maintaining his classical credentials. He collaborated with top lyricists like Ira Gershwin, Yip Harburg, and Ogden Nash, employing a sophisticated harmonic vocabulary and a melodic daring that were far ahead of their time. He continued both his classical and Broadway work in New York and California into later life, but many of his rich and varied work is all but forgotten today.

The selection of songs on Dawn Upshaw Sings Vernon Duke evolved over nearly a two-year period, and came to include several tunes unheard in over fifty years. Beautiful ballads (“Born Too Late,” “Words Without Music”) sit alongside humorous novelty songs (“Swattin’ the Fly”) and jazz-inflected tunes (“Not a Care in the World”). The haunting “Round About” (published only in a condensed version) was one of the most challenging songs to restore. Producer Tommy Krasker found a forgotten patter section at the Warner Bros. warehouse in Secaucus and lost lyrics at the New York Public Library, allowing the song to be heard in its original form for the first time since it was introduced in 1946. Other songs receive their first recordings here.

Dawn Upshaw Sings Vernon Duke reunites her with Krasker and conductor Eric Stern; guest artists Fred Hersch and John Pizzarelli; and a team of talented orchestrators—in the rediscovery of a composer whose theater and art songs may finally have found their time. Duke’s widow, Kay Duke Ingalls, opened up her own personal archive, as well as a closed collection at the Library of Congress to make this recording possible.

“Every dogma has its day, but good music lives forever,” wrote Vernon Duke. Or, to quote Bernard Holland in a New York Times review of a March 1998 Library of Congress concert: “The best of this music goes beyond entertainment … Listening to Duke songs convinced me, at least, that forced to choose, I would trade all of Henry Cowell and Virgil Thompson, most of Hindemith and even a little Brahms for the first eight bars of ‘April in Paris.’” 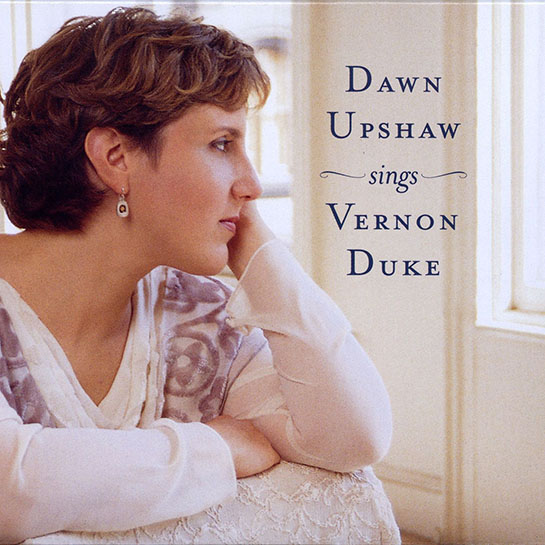