Upshaw explores the legacy of Broadway's storied composer team; guests include Audra McDonald and Fred Hersch. The Independent (UK) says “it's invariably charming and stylish, and when she sings about turning Manhattan into 'an isle of joy' it's surprisingly touching.”

Dawn Upshaw returns to the world of music theater for her sixth solo Nonesuch release, a highly personal selection from the Rodgers & Hart songbook. Fifteen tunes—from the duo’s first hit “Manhattan” to their last great ballad “Nobody’s Heart”—trace the rich development of the songwriting team that redefined the Broadway song from the 1920s until the 1940s.

Featuring a varied set of arrangements, the collection joins Upshaw with a team of new and familiar Nonesuch collaborators, including conductor Eric Stern; the Orchestra of St. Luke’s; pianist Fred Hersch; soprano Audra McDonald; and baritone David Garrison. The recording is produced by Tommy Krasker.

“Few opera singers have ever seemed so convincing—and comfortable—in the Broadway idiom” wrote TIME magazine in what was to be the first of many accolades for Upshaw’s first music theater collection, I Wish It So. The disc went on to win the 1995 Gramophone Award in Music Theatre as well as Best of the Year distinctions from The Guardian, The Sunday Telegraph, and The Independent on Sunday, among others.

Simultaneously, Upshaw’s opera and recital recordings and international appearances place her among today’s most sought-after sopranos. With Dawn Upshaw Sings Rodgers & Hart, this most American of singers reaffirms her love for and identification with the Golden Age of musical theater, one of many stages that she occupies. In the words of Diapason, “Dawn Upshaw is the voice of the century, on the most bewitching path.”

ABOUT RODGERS AND HART

New Yorkers from opposite sides of the tracks, Richard Rodgers and Lorenz Hart met in 1919. Rodgers, at 16 just entering Columbia University, and Hart, at 24 just establishing his career, first collaborated on several university productions and fledgling Broadway ventures before their first success in 1925, Garrick Gaieties. Featuring the song “Manhattan,” it served as the springboard for their songwriting partnership, and was followed by A Connecticut Yankee (1927), On Your Toes (1936), Babes in Arms (1937), The Boys from Syracuse (1938); and Pal Joey (1940). The team continued through 1943, when Hart died at the age of 47.

Together Rodgers, who was to go on to Oklahoma and South Pacific, and Hart, “the Laureate of Lyrics,” elevated the level of Broadway song from lightweight entertainment to witty, often poignant, commentaries. They avoided the obvious rhyme or cadence, preferring instead something memorable. “Everything you fellows write is clever,” once complained the legendary impresario Florenz Ziegfeld, wanting just a simple hit.

Rodgers and Hart scored enough of these, however, including such standards as “I Could Write a Book” and “It Never Entered My Mind” and show-stoppers like “Thou Swell” and “Mountain Greenery.” Upshaw also re-introduces several little-known songs on this collection, like the ballad “He Was Too Good To Me”; the original Hugh Martin arrangement of “Sing For Your Supper”, in which Upshaw takes all three parts; the delightfully naughty “Twinkle in Your Eye”; “Ev’ry Sunday Afternoon”, a rarely recorded song about tryst-planning among domestic staff; and “You’re Nearer,” which was introduced by Lucille Ball in the film Too Many Girls. 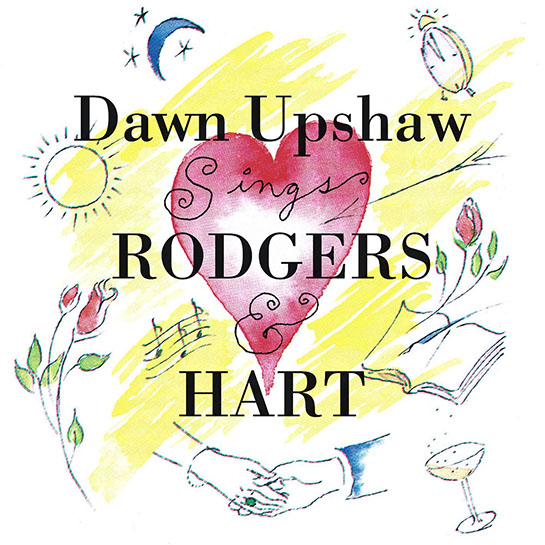