Over the decades, since their childhood concerts in Brazil and their New York appearances as teenagers in 1969, brothers Sérgio and Odair Assad have taken as their base the traditional repertoire of the guitar duo and added to it the contributions of fellow Brazilians; Argentine composer Astor Piazzolla; the treasures of Baroque music; George Gershwin; and more. Over time they have mixed styles, periods, and cultures, even in the course of a single evening’s concert. Among the many artists with whom they have collaborated are Gidon Kremer, Dawn Upshaw, Yo-Yo Ma, Fernando Suarez Paz, and Nadja Salerno-Sonnenberg.

Since their childhood concerts in Brazil and their New York appearances as teenagers in 1969, the Assad brothers have followed a fascinating path of musical development. Having taken as their base the traditional repertoire of the guitar duo, which they refer to as the works of the Presti-Lagoya duo, they started by adding to it the contributions of fellow Brazilians Radames Gnattali, Francisco Mignone, Heitor Villa Lobos, Marlos Nobre, Egberto Gismonti, Wagner Tiso, and Hermeto Pascoal.

In the early 1980s, Sérgio and Odair Assad made a name for themselves in Europe. Their talent and extraordinary musical personalities astounded and delighted audience after audience. Among these was Astor Piazzolla, who was captivated after hearing them play at the house of a mutual friend in Paris in 1983. Shortly after this first encounter, he dedicated to them three original tangos for two guitars, the so-called Tango Suite, which today is part of the repertoire for most of the world’s guitar duos. During their exploration of the treasures of Baroque music, the brothers took one hand each in the two-handed harpsichord pieces of Rameau, Scarlatti, Bach, and Couperin, a marvelous experiment out of which came a recording. Over time they have refined their surprising yet harmonious way of mixing styles, periods, and cultures, even in the course of a single evening’s concert. The Assad brothers have added to their repertoire not only the pieces written for them by Nikita Koshkin, Terry Riley, and many others, but also a series of daring adaptations including Gershwin’s Rhapsody in Blue. Their rendition of Darius Milhaud’s Scaramouche or Alberto Ginastera’s Sonata, opus 22, for piano leaves audiences amazed to discover that a score so familiar to them could be given such a colorful, rhythmical, and impassioned interpretation.

Various commissions and joint projects have since widened the scope of the brothers’ musical involvement, like the music of the Japanese film Natsu no Niwa, which Sérgio was asked to write and the brothers recorded in 1994, and their many joint concerts and recordings: in 1996 with violinist Gidon Kremer and soprano Dawn Upshaw, in 1997 with cellist Yo-Yo Ma and violinist Fernando Suarez Paz (which earned a Grammy), in 1998 with violinist Nadja Salerno-Sonnenberg, and in 1999 with violinist Iwao Furusawa. This is not to mention the concertos for two guitars written for them by the Brazilian composers Edino Krieger and Marlos Nobre, and the projects which they are now eagerly planning. The Assad brothers record exclusively for Nonesuch Records.

Their dedicated work and boundless imagination have given Sérgio and Odair the status of commanders in the world of the guitar. Their duo is a “veritable phenomenon," says Diapason, "which, with time to mature, will go down in history.” 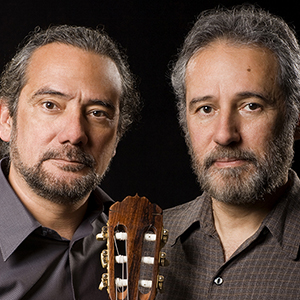