The Assads, says the New York Times, “have always shown a passion for Latin works that can be equally regarded as formal classical music and jazz.” On this set, featuring Sérgio Assad’s five-movement title suite, “they blur the lines exquisitely.”

Sérgio and Odair Assad began performing together 30 years ago, when they were 12 and 8, respectively. One experiences the uncanny result of this long partnership in the precise and seeming unconscious ensemble they bring to everything they play. From Bach and Scarlatti to original works by Sérgio Assad, the duo has been playing a wide range of music since their boyhoods outside São Paulo, where their first teacher was their father, a mandolinist. Their first public performance took place 6 months after their studies began; they have been performing almost exclusively as a duo ever since.

Bob Hurwitz, President of Nonesuch, discovered the Assad brothers at a New York concert 10 years ago, and recorded them the next day. That Latin Amercian recording was followed by Alma Brasiliera in 1988, after which the Duo relocated from Brazil to Brussels. In 1993, they released a collection of Baroque transcriptions which was hailed by Gramophone as “a seemingly effortless command of the instruments ... [T]hey are in as tight accord as the two hands of any keyboard player.”

Matching virtuosity with sensitivity, the duo Assad returns to the music of Brazil and Argentina with Saga dos migrantes, the culmination of ten years of regular recording and concertizing activity throughout Europe, North America, South America, and Japan.

All songs arranged by Sérgio Assad 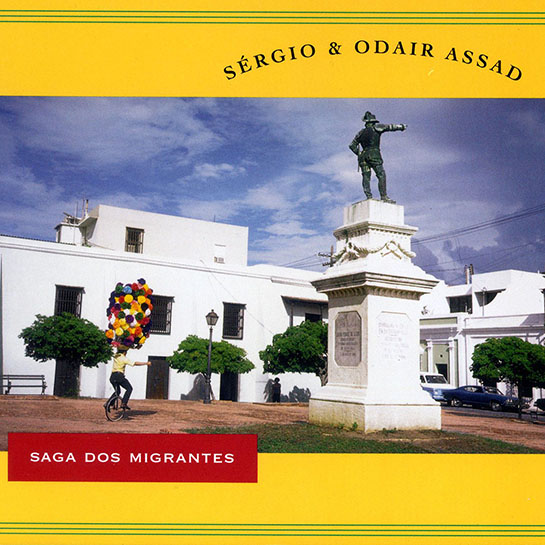