Bassist/composer Viktor Krauss was born in Champaign, Illinois, in 1969. He grew up listening to movie soundtracks and predominantly instrumental music. At the age of five, Krauss was encouraged by his parents to pursue an instrument; he chose piano, then added trumpet in the fourth grade. As a boy, Krauss sang in university productions, including the role of Amahl in Menotti’s opera Amahl and the Night Visitors. After attending a middle school concert, Krauss became inspired by the double bass due to its ominous sonic and visual qualities. Krauss had found his truest musical friend; quickly realizing that the bass was generally needed in any form of music, he became interested in idioms outside of the school orchestras. He started playing with local jazz groups as well as occasionally accompanying his sister, Alison, at fiddle competitions.

A friend approached Krauss during high school with plans for forming a rock band. His work with the group sparked an enduring enthusiasm for rock and R&B. Krauss became enthralled with groups like the Police, Marvin Gaye, Stevie Wonder and, most significantly, Led Zeppelin, and began prolifically writing pop and rock-based songs.

After high school, Krauss began studying bass at the University of Illinois. Finding creative avenues to be more rewarding, he completed his degree in music composition—with an emphasis on electronic and tape music—and minored in voice. His compositions included a work for bowed Fender bass, delay/echo, and voice; and a 12-tone “serial” work for 12-string electric guitar. While in college, Krauss—along with Sean Smith (co-writer on two selections on Far From Enough)—formed the Zappa-esque rock band Difficult Listening, which played university venues as well as listening rooms from 1989 to 1992. From 1992 to 1993, Krauss toured and recorded with Peter Rowan and the Free Mexican Air Force at Americana venues like Mountain Stage and A Prairie Home Companion.

Krauss began recording and touring with Lyle Lovett in 1994. The Lovett recordings on which Krauss plays include Step Inside This House, Songs from the Movies, Live in Texas, and selections from Anthology, Volume I. Lovett’s 2003 release My Baby Don’t Tolerate, again features Krauss on bass and also as co-writer on “You Were Always There.” Krauss and Lovett, along with Nashville pianist and producer Matt Rollings, collaborated on the score for the 2000 Robert Altman film, Dr. T. and the Women.

Krauss recorded several selections for Alison Krauss’s 1999 solo album, Forget About It, and also played on her 1994 record with the Cox family, I Know Who Holds Tomorrow. For the 1996 movie Twister, Krauss co-wrote and co-produced “Moments Like This” with Michael McDonald for Union Station. Jerry Douglas’s Restless on the Farm included Krauss on bass, as did his record Lookout for Hope. In 2000, Krauss recorded on Graham Nash’s Songs for Survivors, a Russ Kunkel and Nathaniel Kunkel production.

The Nonesuch release Far From Enough is Krauss’s first solo recording; he calls it a “soundtrack without the movie.” The record covers a vast spectrum of music that Krauss has enjoyed over the years. Krauss is an avid collector of pedals, vintage electronic musical equipment, and Tonka Volkswagens. 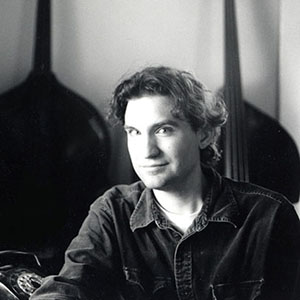