The late Michael Disfarmer was an odd, curmudgeonly character in rural Arkansas, who, despite his anti-social character, chose to record the stark images of his fellow townspeople, during the 1940s and '50s, in black-and-white photo portraits. Frisell has set the images to music for this recording, to which the Observer gives four stars, calling it "brilliantly" done; the BBC finds it "quietly impressive ... a patchwork quilt sewn with empathy, warmth and a sense of weary pathos."

The late Michael Disfarmer was an odd, curmudgeonly character in the rural community of Heber Springs, Arkansas, who, despite his anti-social character, chose to record the stark images of his fellow townspeople, during the 1940s and '50s, in cheap black-and-white photographic portraits. Decades after the photographer’s passing, a cache of work made by this solitary and oft-reviled man was rediscovered, and he has come to be regarded as an important outsider artist. Among the many drawn to his plain yet deeply evocative pictures was Chuck Helm, Director of the Performing Arts at the Wexner Center in Columbus, Ohio, who introduced guitarist and composer Bill Frisell to Disfarmer’s oeuvre on the hunch that Frisell might be inspired by it.

Says Helm, the catalyst for Disfarmer, "To me, Bill Frisell is a uniquely American artist with a distinctive and singular musical voice, like that of Thelonious Monk or Aaron Copland. In his probing yet atmospheric evocations of American vistas I could hear parallels to the emotional truths of Disfarmer’s compelling photographs.”

As Helm suspected, Disfarmer’s work resonated with Frisell and led to the creation of a touring multimedia work, Disfarmer Project—featuring Frisell, lap steel guitar player Greg Leisz and violinist Jenny Scheinman, plus slides of Disfarmer’s photos, displayed on screens. The piece premiered on March 3, 2007, at the Wexner Center, on the campus of Ohio State University. The score was subsequently recorded in Seattle and Nashville, produced by Frisell’s longtime collaborator Lee Townsend and also featuring Viktor Krauss on bass. Along with the Frisell’s original compositions, he interpolates versions of such tunes as Arthur Crudup’s “That’s Alright Mama” and Hank Williams Sr.’s “I Can’t Help It (If I’m Still in Love with You)” into this subtly—yet stunningly—beautiful set.

In his liner notes, Frisell, who took a driving trip to Heber Springs to learn more about the area where Disfarmer chose to ply his trade, says, "Of course I was blown away when I saw his photos for the first time and started to learn a little about his life. What a fantastic story ... I kept thinking about the many other unsung and misunderstood artists who never had the recognition they deserved during their own time: Vermeer, Van Gogh, Charles Ives, Henry Darger, etc. ... I try to picture what went on in Disfarmer’s mind. How did he really feel about the people in this town? What was he thinking? What did he see? We’ll never know, but as I write the music, I’d like to imagine it coming from his point of view. The sound of him looking through the lens."

All compositions by Bill Frisell, except “That's Alright, Mama” by Arthur Crudup, “Lovesick Blues” by Cliff Friend and Irving Mills, “I Can’t Help It (If I’m Still In Love With You)” by Hank Williams Sr., “Shutter, Dream” by Bill Frisell, Greg Leisz, Jenny Scheinman, and Viktor Krauss. "Arkansas” is based on the song “Arkansas Traveler” by Colonel Sanford C. "Sandy" Faulkner.

The photographs of Mike Disfarmer are used by kind permission of Peter Miller, to whom we would like to express our deepest gratitude. For more information on Disfarmer’s work, please visit www.disfarmer.com.

This music was commissioned by the Wexner Center for the Arts in Columbus, Ohio and The Walker Arts Center, Minneapolis. 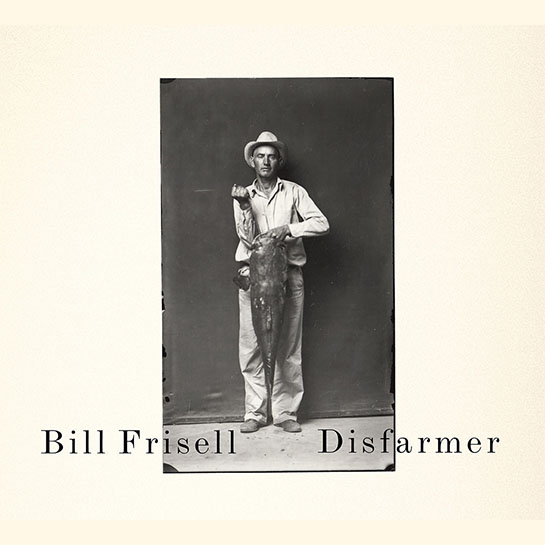