Ry Cooder’s Election Special is a wake-up call for the 2012 US election. On the album, which he produced, Cooder plays mandolin, guitar, and bass and wrote all of the songs, co-writing one with Joachim Cooder, who plays drums on the record. Uncut names Election Special Album of the Month. Mojo gives it four stars, saying: "Ry has proved equal to the crying need of the times." The Guardian gives the album four stars as well, calling it "an entertaining, thoughtful and bravely original set." Rolling Stone, in its four-star review, exclaims: "A guitar great takes a shot at political satire and hits the mark."

Ry Cooder’s Election Special, due out from Nonesuch / Perro Verde Records on August 21, 2012, is a wake-up call as the United States heads into the fall election season.

“Howdy there neighbor—let me ask you something. Do you really think Charlie and Davy sit around on the couch with family and friends watching re-runs of Dancing with the Stars?," asks Cooder. "See, 'Wasting Away in Margaritaville' was a good song in its day, but we need a different kind of a song now if we’re going to make headway against the likes of Charlie and Dave. Those type of guys are plenty swift, they’re all deacons in the High Church of the Next Dollar. We need to get smarter, fast. The world is full of C and D students in high places and there’s more coming up all the time. Don’t be one.”

Cooder has this to say about the songs on the album:

For a taste of "Mutt Romney Blues," check out this short video by Brave New Films set to the tune:

All songs written by Ry Cooder, except “Take Your Hands off It” by Ry Cooder and Joachim Cooder 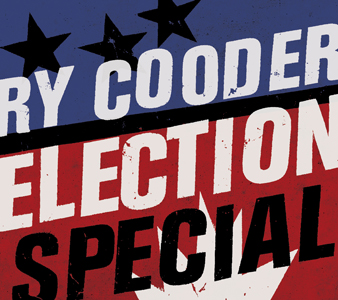