Ry Cooder wrote the song "Quicksand" in response to Arizona's 2010 immigration law, SB 1070. A slow-burning rocker that tells the story of six would-be immigrants making their way from Mexico to the Arizona border, "Quicksand" is available exclusively on iTunes, with all proceeds will going to support MALDEF, the Mexican American Legal Defense & Education Fund.

In response to the immigration battle currently raging in the United States, six-time Grammy winner Ry Cooder wrote "Quicksand," a slow-burning rocker that tells the story of six would-be immigrants making their way from Mexico to the Arizona border. The track, available exclusively on iTunes, features Cooder's son Joachim on drums, along with backup vocals by Lucina Rodgriguez and Fabiola Trujillo of Mexican roots band Los Cenzontles. Cooder has chosen MALDEF, the Mexican American Legal Defense and Education Fund, to receive all proceeds from sales of the single.

Thirst, hunger, injury, and fear befalls Cooder’s immigrants during their journey. "Quicksand I think we lost direction," he laments in the chorus, referring to more than just the song’s protagonists, "I think we're sinking down." At the border, a vigilante in a Dodge Ram turns away the song's only two survivors. "I think you'd take more pity on rescue pit bull dogs," the narrator pleads before turning around to face his death sentence in the scorching heat of the desert.

“The Devil’s Highway has been used by migrants traveling on foot for over 100 years,” says Cooder. “You should try it sometime. Out there, temperatures can get above 130 degrees. If you fall down, you have religious hallucinations, then you die, cooking from the inside out. If you get lucky, you might make it to Yuma, but then what? That's no comfort station they run up there, cabron.”

MALDEF President and General Counsel Thomas A. Saenz says, "Defeating Arizona's SB 1070—and the potential copycat laws that have since been announced by unscrupulous legislators around the nation—will require a broad national community effort to reinforce the constitutional principles and values that characterize our nation. Our heartfelt thanks to Ry Cooder for being a leader in that necessary community effort." For more information on the organization and its efforts, visit maldef.org.

The artwork for the single features the piece "Nuthin' To See Here, Keep On Movin'!" by Vincent Valdez, the Texas-born artist whose illustrations have been featured on Cooder's 2007 album My Name Is Buddy and on El Chávez Ravine, the refurbished ice cream truck Cooder commissioned in honor of the Los Angeles Chicano community razed in the 1950s to make way for Dodger Stadium and the subject of his 2005 album, Chávez Ravine. 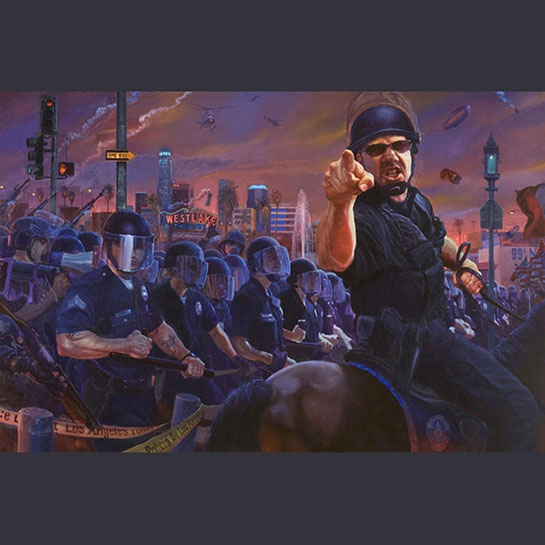