Punch Brothers' album Hell on Church Street is the band's reimagining of, and homage to, the late bluegrass great Tony Rice’s landmark solo album Church Street Blues, featuring an inspired collection of songs by Bob Dylan, Gordon Lightfoot, Bill Monroe, and others. Recorded in November 2020, Hell on Church Street had been intended as both its own work of art and a gift to Rice, who died later that year. "After we got over the shock of losing our hero and friend," Noam Pikelny says, "we realized what Tony had left with us was his music, his spirit, and his legacy." "We spent a lot of time contemplating what happened when Church Street Blues hit our ears as a band," Chris Thile says: "we held it out, we conversed with it, and now we’re handing it to you." Grammy Nominee for Best Folk Album.

Recorded at Nashville’s Blackbird Studio in November 2020, during a time of great uncertainty, Hell on Church Street was intended as both its own work of art and a gift to Rice, who died that Christmas. Punch Brothers said of Tony Rice and Church Street Blues: “No record (or musician) has had a greater impact on us, and we felt compelled to cover it in its entirety, with the objective of interacting with it in the same spirit of respect-fueled adventure that Tony brought to each of its pre-existing songs.”

Hell on Church Street follows Punch Brothers’ critically acclaimed and Grammy Award-winning 2018 album All Ashore, which featured nine original songs written by the band. The Boston Globe said of All Ashore, “Punch Brothers have crafted a deeply meaningful and downright gorgeous record that takes the world for what it is, but doesn’t use that as an excuse to give up.” 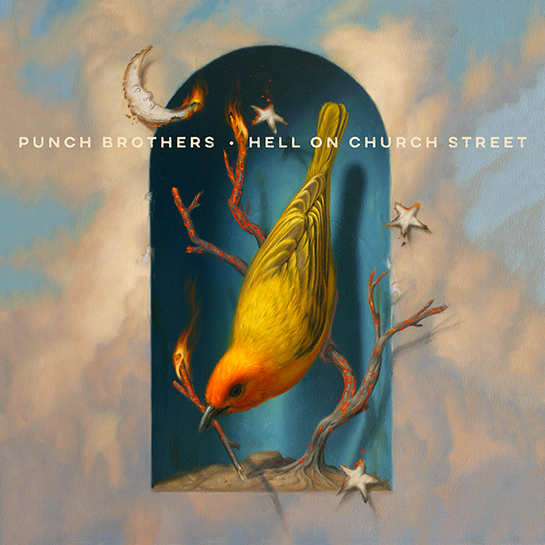