Originally conceived as part of Robert Wilson's epic 1984 play the CIVIL warS, David Byrne’s The Knee Plays is “a strangely timeless set that echoes everything from early New Orleans jazz to brassy atmospheric passages or the quirky charm of a great Talking Heads song” (Guardian, UK). Now on CD for the first time, it includes eight previously unavailable bonus tracks plus a full-length DVD slideshow with music featuring 400 photographs of the original staging.

This re-mastered album was first recorded in 1985 and has never before been released on CD. The release includes the 12 original tracks, eight bonus tracks, previously unseen visual materials, and a full-length DVD slideshow with music featuring 400 black-and-white photographs by JoAnn Verburg of the original staging.

The Knee Plays grew out of a relationship between David Byrne and avant-garde stage director and playwright Robert Wilson. In 1983, while preparing a piece entitled the CIVIL WarS to be performed at the 1984 Olympic Games in Los Angeles, Wilson invited Byrne to score the “knee plays”—or entr’actes—that would come in between each of the plays that would make up the days-long theatrical epic. Inspired by Wilson’s experimental creative process and the Dirty Dozen Brass band, whom he had heard on a trip to New Orleans, Byrne created a score in twelve parts that showcased the traditional harmonies of the brass ensemble. “I thought … their funky riffing and incredible feel would be an unexpected yet mesmerizing juxtaposition to Bob’s usually cool stage pictures,” Byrne writes. Taken together, the twelve knee plays would tell the story of a group of people “as they make a boat out of a tree and travel to strange and foreign lands,” according to Byrne.

Adding spoken-word text to the musical mix, Byrne took further inspiration from the Surrealists and John Cage. “None of [this] related to Bob’s story,” Byrne explains. “When you look up at the clouds in the city, and the sound you hear is hip hop and traffic noises, well, that’s the score for the cloud image—you just accept it. So why not accept similar connections on stage?”

In 1985, Byrne recorded the score in Los Angeles and the album was released later that year on ECM Records. “It’s a strange musical mélange,” Byrne says of the recording. “The swinging brass and percussion sometimes become mesmerizing and trancelike.”

While the longer theatrical epic was never performed, Byrne and Wilson’s The Knee Plays was staged at Lincoln Center in 1986 and toured worldwide. The music was performed in concert in 2007. The New York Times called the 1986 performance “one of Mr. Wilson’s most sheerly enjoyable and accessible works” and described Byrne’s contributions as “integral to the piece.” 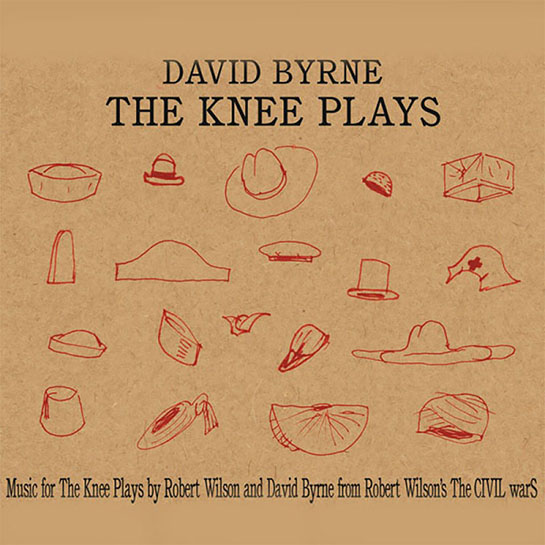