In 2004, Caetano Veloso curated a week of special concerts at New York’s Carnegie Hall and invited his longtime friend and collaborator David Byrne to join him for the show captured here. Each performs an acoustic set of his own songs and also perform together. The Seattle Times calls the concert "an absolute jewel." The Observer gives the album four stars, calling it "an entrancing showcase of their respective talents ... and even on disc a sense of joy and spontaneity is palpable." The Herald says it "leaves the listener grinning from ear to ear."

In the spring of 2004, Caetano Veloso curated a week of special concerts at New York’s Carnegie Hall as one of its prestigious Perspectives artists. As part of the series, he invited his longtime friend and collaborator David Byrne to join him for an evening in Isaac Stern Auditorium. The concert was recorded for broadcast on NPR and now will be released by Nonesuch as Caetano Veloso and David Byrne: Live at Carnegie Hall on March 13, 2012. The singer/guitarists each performed an acoustic set of their own songs, joined by cellist Jaques Morelenbaum and percussionist Mauro Refosco, and also performed together.

“When I got the invitation to curate a program for Carnegie Hall’s Perspectives … the one American artist I was sure I wanted to invite was David Byrne,” Veloso recounts. “I met David in the 1980s … [He] impressed me by showing a very lively ear to whatever was on Brazilian radio. From our first conversation I noticed David was the first rock musician who could really feel the essence of Brazilian music … When I had to go on stage with him, I was not nervous, but I was very shy. You’ve got to be Brazilian (or something of the like) to know how awesome (I mean AWEsome) it is to sing side by side with David Byrne.”

Byrne says of his admiration for Veloso, “I’d been a Caetano fan since the late ‘80s, when I’d fallen headlong down the rabbit hole of Brazilian music. If I had to name some musicians to whom I would look as a guide to what is possible—those musicians who have managed to sustain a creative and interesting life in music—Caetano would be among the top few.” Of the 2004 concert, he continues, “I was incredibly nervous, and I remember having flubbed on a chord or two (some of those remain on this recording, I’m afraid) … but of course it was Caetano, and Carnegie Hall, so I was also incredibly thrilled and flattered.”

Caetano Veloso is among the most influential and beloved artists to emerge from Brazil, where he began his musical career in the 1960s. He has nearly 40 recordings to his credit, including 13 on Nonesuch—the most recent of which is 2010’s zii e zie. Absorbing musical and aesthetic ideas from sources as diverse as The Beatles, concrete poetry, the French Dadaists, and the Brazilian modernist poets of the 1920s, Veloso—together with Gilberto Gil, Gal Costa, his sister Maria Bethania, and a number of other poets and intellectuals—founded a movement, called Tropicalismo, that permanently altered the course of his country’s popular music.

David Byrne, known as the force behind the enormously popular Talking Heads (1976–88), complements his two-plus decade solo career with work as a photographer, designer, film director, and author. Byrne’s Nonesuch releases include Grown Backwards (2004), reissues of My Life in the Bush of Ghosts (2006) and The Knee Plays (2007), and Here Lies Love (2010), a song cycle he wrote with Fatboy Slim about the life of former First Lady of the Philippines Imelda Marcos and her childhood servant, Estrella Cumpas. Byrne’s most recent book, Bicycle Diaries (Viking, 2009), chronicles his observations and insights—what he is seeing, whom he is meeting, what he is thinking about—as he pedals through and engages with some of the world’s major cities.

This album is available from Nonesuch Records in the world outside of Latin America. 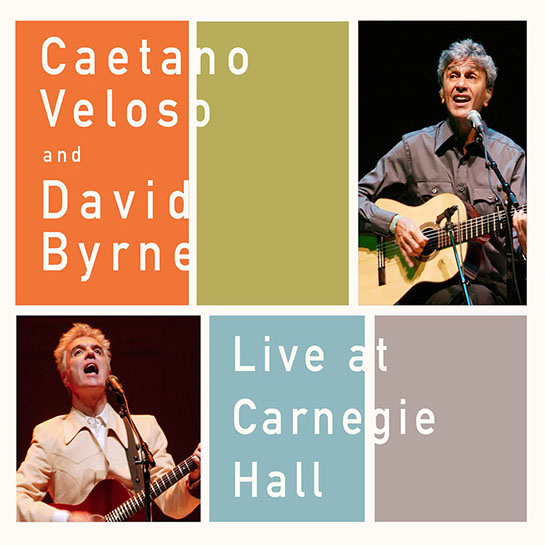