My Life in the Bush of Ghosts (LP)

David Byrne and Brian Eno stumbled onto the future with this groundbreaking work, using found sounds and trance-like rhythms, anticipating innovations of contemporary electronic dance music, world music, even hip-hop. The 25th-anniversary re-mastered version includes seven previously unreleased tracks. This 12" double-vinyl release on 180-gram vinyl includes additional drum, vocal, and ambient tracks for "Help Me Somebody" and "A Secret Life" not available on CD or MP3.

When the David Byrne / Brian Eno collaboration My Life in the Bush of Ghosts was first released in 1981, Rolling Stone called it “an undeniably awesome feat of tape editing and rhythmic ingenuity.” It was widely considered a watershed record for future genres from world music to electronica, and almost 25 years later, the influence of My Life in the Bush of Ghosts is evident in music ranging from The Bomb Squad’s productions for Public Enemy to Moby, Kruder and Dorfmeister, and Goldie. Nonesuch reissued the album—remixed, remastered, and with seven bonus tracks—on its 25th anniversary, in 2006. Now, in 2009, comes the 12" double-vinyl release on 180-gram, audiophile-quality vinyl, with additional drum, vocal, and ambient tracks for "Help Me Somebody" and "A Secret Life" not available on CD or the album MP3s.

My Life in the Bush of Ghosts is inspired by Byrne’s and Eno’s shared love of African pop, and their particular fascination with the music of 1970s West Africa. In addition to playing by Byrne and Eno, the album incorporates a variety of “found” voices: radio talk-show hosts, Lebanese mountain singers, preachers, exorcism ceremonies, Muslim chanting, and Egyptian pop, among others. My Life in the Bush of Ghosts also includes the contributions of eleven other musicians, including Bill Laswell, Tim Wright, David van Tieghem, and the Talking Heads’ Chris Frantz. Byrne’s and Eno’s explanations of My Life in the Bush of Ghosts could easily be descriptions of records released two decades later and considered groundbreaking for theirtime. Eno says, “It's almost collage music, like grafting a piece of one culture onto a piece of another onto a piece of another, and trying to make them work as a coherent musical idea, and also trying to make something you can dance to.” Byrne further elucidates the recording process: “At that time there were no samplers, so the found vocals were inserted into the music by trial and error. We’d have two tape machines playing simultaneously, one containing the track and the other the vocal and, if the gods willed, which they often seemed to, there would be a serendipity, the vocal and the track would at least seem to feel like they belonged together, and it would be a ‘take.’ It was all ‘played” and very seat-of-the-pants. There was none of the incremental tweaking and time-correcting that is possible with modern samplers and computers, so throwing the vocals against the tracks was in our case almost a performance.”

Title from the book My Life in the Bush of Ghosts by Amos Tutuola (Grove Press)
Reissue CD design by Peter Buchanan-Smith; LP layout by Alice Arnold; original package design by Peter Saville 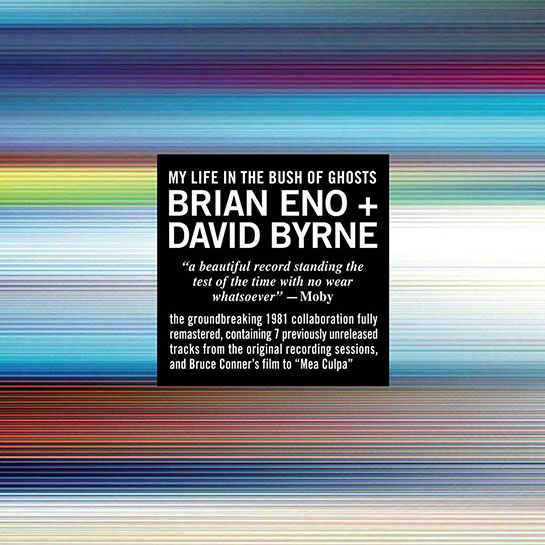