The Trio—"a graceful powerhouse, equally savvy about groove and harmony" (New York Times)—performs 11 previously unreleased songs composed by Mehldau. Many were written as tributes, or “odes,” to real and fictional people, like the late saxophonist Michael Brecker, a character from the film Easy Rider, and the guitarist Kurt Ronsenwinkel. "Ode is an often scintillating and always joyful listen from beginning to end," says MusicOMH. The Chicago Tribune finds Mehldau "in prime form as composer, improviser and bandleader." The Montreal Gazette says: "This may well be his most interesting, absorbing album to date." The Financial Times calls it "benchmark piano-trio jazz."

Nonesuch releases an album of original songs from the Brad Mehldau Trio—Ode—on March 20, 2012. The record, which is the first from the trio since 2008’s live Village Vanguard disc and the first studio trio recording since 2005’s Day Is Done, features 11 previously unreleased songs composed by Mehldau. The trio comprises Mehldau on piano, Jeff Ballard on drums, and Larry Grenadier on bass.

“Ode is a collection of originals that I wrote specifically for my trio with Larry and Jeff,” says Mehldau. “I feel that what they bring to the music in the performance here is inseparable from the tunes themselves.” Most of the songs, he explains, “are tributes to someone else, and I began to think of them as odes, or poems that might be sung; in our case here it’s the singing only without all those pesky words.” Subjects include the late saxophonist Michael Brecker (“M.B.”), a character from the film Easy Rider (“Eulogy for George Hanson”), and the guitarist Kurt Ronsenwinkel (“Kurt Vibe”).

Mehldau moved to New York City in 1988, studying at the New School and playing in a number of different combos—including a stint in Redman’s quartet—before becoming a bandleader himself. His trio, which tours the world extensively, made eight acclaimed recordings for Warner Bros., including the five widely praised Art of the Trio albums with former drummer Jorge Rossy, which Nonesuch released as a boxed set in December 2011.

The pianist’s time with Nonesuch has been equally productive, beginning with the solo disc Live in Tokyo and including the three trio records Day is Done, House on Hill, and Live as well as a collaboration with soprano Renée Fleming, Love Sublime; a chamber ensemble album, Highway Rider; and two collaborations with label mate Pat Metheny, Metheny Mehldau and Quartet, the latter of which also includes Ballard and Grenadier. In addition to the Art of the Trio box set, Mehldau’s other two Nonesuch releases last year showcased other facets of his varied career as it enters its second decade: his live solo performances on Live in Marciac and his collaborations with genre-crossing musicians on Modern Music, with composer/pianist Kevin Hays and composer/arranger Patrick Zimmerli.

All songs composed by Brad Mehldau 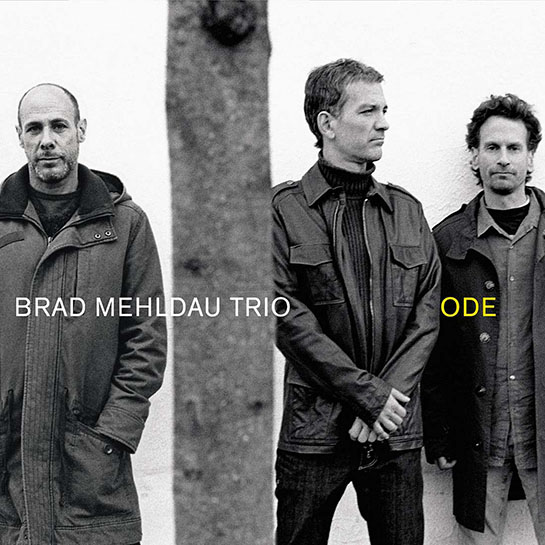