With no synths, no drum kits, and every instrument unplugged, the pristine Realism is the flip-side to the brash noise-pop of The Magnetic Fields' 2008 Distortion. Singer-songwriter Stephin Merritt calls it "folk," but with its wide range of instrumentation and orchestrated arrangements, says Merritt, "Realism is a more kaleidoscopic approach to a genre.” The BBC calls it "absolutely prime Merritt." The vinyl album releases on February 9.

Singer-songwriter Stephin Merritt originally conceived Realism, The Magnetic Fields’ third Nonesuch release, due out January 26, 2010, on CD and February 9 on vinyl, as a companion to the group’s brash 2008 Distortion, though the more tremulous listeners among us can rest assured they won’t have to frantically reach for the volume-control knob this time. Realism, at least on its decorous surface, comes across as a flipside to Distortion, the aural opposite of that clangorous homage to industrial pop of the Jesus and Mary Chain.

“I thought of the two records as a pair,” Merritt reveals, “and I kind of wanted them to be called True and False. But I couldn’t decide which I wanted to be called True and which I wanted to be called False. They both have to do with the notions of truth and falsehood in recording and music—not particularly with the lyrics but with the production style. Distortion went as far as one could really go in the direction of stylized noise-pop, which is probably the limit of stylization in rock before it turns into some other genre. And Realism is folk, although I couldn’t really bring myself to go all the way with folk. I can’t stand the sound of an acoustic guitar for more than three minutes at a time. So I didn’t go really, really folk, I thought I would go in a ‘variety folk’ format, like a Judy Collins or a Judy Henkse album. Most of my favorite records are variety records. Distortion was one monolithic production idea and Realism is a more kaleidoscopic approach to a genre.”

Merritt was inspired by the orchestrated British folk of the late ’60s / early ’70s, which had evolved beyond the strictures of traditional music following sustained exposure to the psychedelic movement, and by the groundbreaking work of arranger-producer Joshua Rifkin on Collins’ In My Life and Wildflowers. Says Merritt, “It was as if the world were put on one record, where you have absolutely no idea what’s coming next. I like that in radio programming. I like it when I’m deejaying, I like doing it on my own records. With Collins’ records, there are hardly any musicians in common from track to track and each song is written by a different person.” Merritt, of course, writes everything himself. “I just pretend to be a lot of different writers.”

He brings the concision of a three-minute pop-song to each of the 13 tracks on Realism. As he puts it, “I like songs short; I don’t go for big statements in general. I find it difficult to listen, say, to Beethoven. I prefer small cozy, charming, subtle things, not masterpieces and epics.” The tracks here range from the trippy, toy-box melodies of "The Dolls' Tea Party" and "Painted Flower" to the almost alarmingly insistent, group sing-along of “We Are Having a Hootenany.” “Seduced and Abandoned,” in which Merritt himself essays the role of a woman impregnated then spurned at the altar, features a sad circus-like melody with mournful tuba; “Interlude” is a spare, elegant ballroom dance, dreamily recalled from afar. There's even a deceptively festive holiday number, “Everything Is One Big Christmas Tree,” featuring a lusty chorus sung in German.

In these songs, reality is as distorted as ever, and the characters who populate them are never just plain folk. Merritt’s work veers between longing and loneliness, desire and dismissal, romance and revenge, though the melancholic musings of his narrators are cut with sardonic humor. At the end of the disc, Merritt literally leaves his characters shipwrecked. That’s just the final wicked stroke for his hapless yet hopeful creations, who have already been romantically or emotionally marooned. Merritt admits that his “folk” format might encourage inquiring minds to look for more autobiography in his tunes, but he cautions against that: “I’ll probably have the same problem as I did with i”—The Magnetic Fields’ 2004 Nonesuch debut—“where people wanted the lyrics to be particularly journalistic because of the album title. People may want me to be expressing myself more on Realism, more than they did on Distortion, but I think they won’t be rewarded. Or they will—but not through anything I’ve done.”

The Magnetic Fields had quickly recorded Distortion in the stairwells, hallways and the bathroom of Merritt’s apartment in a venerable old building in Manhattan’s Chelsea neighborhood that he was about to vacate for a new home in Los Angeles. Realism, conversely, was created in more conventional studio surroundings in California, though the band did once again employ the unique acoustic qualities of a bathroom. Explains Merritt, “’From a Sinking Boat’ was recorded entirely using only the actual reverb from my actual bathroom. Except for the sitar track; we cheated. All the other tracks were recorded in the bathroom, far away from the microphone, and they sound very watery, which is the idea, because it’s about a shipwreck. It’s one of my several shipwreck songs.” (Cf. “Shipwrecked,” from the Gothic Archies’ Tragic Treasury.)

Merritt organized the Realism sessions, which began during a break in The Magnetic Fields’ 2008 small-theater tour, around a few simple rules, starting with one that also applied to Distortion: no synths. He banished instrumentation that needed to be plugged in, which proved to be no impediment. The group assembled a fascinating arsenal of acoustic instrumentation: bouzoukis, banjos, cellos, violins, accordions, tubas, tablas, even a smattering of mellifluous falling leaves. And, Merritt adds, “We didn’t actually hit any drums. I think there is a cymbal on ‘Always Already Gone.’ There are no drums hit with sticks, anyway. The sound on ‘The Dada Polka’ is kind of drum-like, but I think they are bongos. Claudia Gonson played tablas on a number of songs, and they are a type of drum, but there is no drum kit at all. No snare drum. No bass drum.” (Merritt confesses he also cheated just a little on “The Dada Polka,” which does include, albeit subtly, an electric guitar. That’s because the original track dates back to 1986, remaining unreleased until now: “It had been waiting for me to do my folk album, and here I am, doing my folk album.”)

Along with cellist Sam Davol, guitarist John Woo and erstwhile drummer Gonson (who plays piano throughout and sings lead on “The Doll’s Tea Party”), the group was rejoined by vocalist Shirley Simms, who turned in several memorable performances on Distortion, and accordionist Daniel Handler (a/k/a Lemony Snicket, Merritt’s co-conspirator on the Gothic Archies’ The Tragic Treasury, a musical addendum to the book series A Series of Unfortunate Events). This was the same ensemble that had perpetrated Distortion. Says Merritt, “It was the six of us, but for Realism we added Johny Blood, who last played tuba on The Wayward Bus, and Ida Pearle, who played violin on a few tracks of 69 Love Songs. Because of the variety approach to Realism, we recorded each track in a different way. However, none of them involved shrieking feedback, with multiple amplifiers feeding back into microphones. All of the recording techniques involved would qualify as ‘folk.’”

Starting with its deadpan cover art—imagery meant to evoke eco-friendly cardboard packaging, comfortably ensconced in a jewel case—The Magnetic Fields tease our ideas about authentic and ersatz, folk or faux. But once the music starts, it’s easy to suspend disbelief: reality never sounded so good.

All songs © 2010 Stephin Merritt. Published by Gay and Loud (ASCAP). 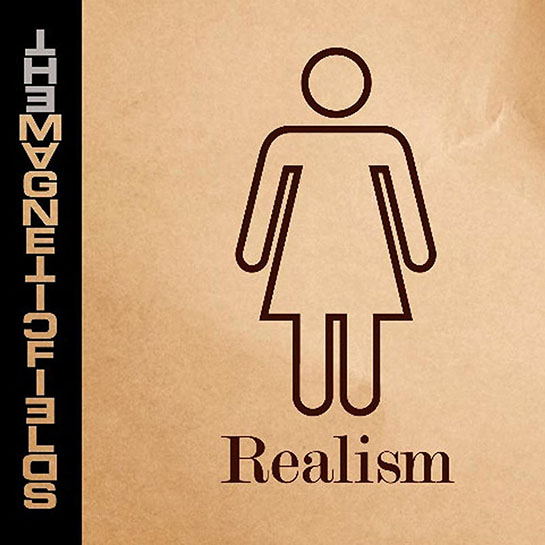