The New York Times has called The Black Keys’ music “tough-minded, blues haunted songs,” and the ghosts of Alabama's legendary Muscle Shoals Sound Studios, where the bulk of Brothers was recorded, inhabit the album's 15 tracks. Time Out, in a five-star review, calls it "a sonic wonderland"; Uncut says it proves The Black Keys to be "one of the best rock 'n' roll bands on the planet." The album won four Grammy awards, including Best Alternative Album.

In the August heat of 2009, The Black Keys left a Brooklyn studio—where they’d been working with an all-star posse of MCs—for 10 days in creative isolation at the historic Muscle Shoals studio in Alabama. Their geographical trek mirrored a musical journey, from contemporary hip-hop jams to the hallowed ground of classic R&B, that has resulted in the most cohesive album—and the deepest, steamiest grooves—of the duo’s eight-year career. These sessions yielded tunes that have the instantaneous, gotta-hear-it-again pull of a vintage 45; leadoff track “Everlasting Light” sounds like something Marc Bolan of T-Rex might have cut if he’d been signed to Stax. But more than just genre- and decade-hopping fun, there’s an emotional candor and narrative quality to the songs that offer a whole new level of soulfulness to the already floorboards-shaking sound of The Black Keys.

Brothers is, in many ways, the culmination of a tumultuous period for Auerbach and Carney as they juggled personal challenges with creative opportunities. For the first time in a career of non-stop touring and recording, Auerbach and Carney embarked on projects of their own, on top of their dates for The Black Keys. Auerbach made his solo debut, Keep It Hid, and hit the road with a full band; Carney picked up the bass for his own combo, Drummer, comprising five notable Ohioan drummers, only one of whom actually sits behind the kit on their disc, Feel Good Together.

Carney, in the midst of a divorce, relocated to New York City from Akron, where Auerbach continues to reside with his young family and has built his own studio, Easy Eye Sound System, modeled after the great live rooms of the ‘50s and ‘60s. (“It’s the nicest studio I’ve been to,” quips Auerbach, “because it was made for me.”) The pair came to Brooklyn at the behest of rap mogul Damon Dash, a fan of The Black Keys who’d invited them to work with rapper Jim Jones. That idea morphed into a bona fide super-session between the boys and some serious hip-hop figures that they wanted to collaborate with, including Mos Def, Raekwon, Q-Tip, and RZA. The result was the independently released Blakroc, a hip hop-R&B hybrid that the NME called “genuinely organic, a common ground of moods … with a slinky, groovy, maxi-fuzzed blues rock to match [the MC’s] swagger.” No sooner had they wrapped the Blakroc dates then they were on their way to Muscle Shoals to find out where their inspiration might lead.

As Carney recalls, “We were going to Brooklyn every other weekend for a couple of months. We finished Blakroc two or three days before we started our record. Blakroc was kind of a warm up for Brothers. In the process of making the Blakroc record we got more and more accustomed to the approach of making music with more bass lines and keyboard riffs than guitar riffs. There is less guitar on this record than any of our other records. I think we were just trying to focus on the grooves rather than what we had expected from ourselves previously.”

Auerbach concurs: “We were basically listening to soul music and hip hop for the week we were down there. That definitely had a lot to do with the way we went about crafting the songs.”

The first track they tackled was “Next Girl,” which, says Carney, “set the tone for the record, with the openness and the simplicity of the bass line.” The song—boasting a cocky, moving-on attitude and a smoldering tempo that mask the heartbreak at its core—wasn’t meant to be autobiographical, but it helped Carney move past what was ailing him that summer. As Auerbach observed, “Pat was in a rough spot, but that song energized him, I think. We didn’t do it on purpose, it just happened that way, but then we were off and running.”

As with countless musicians who’d ventured to Muscle Shoals before them, The Black Keys were attracted to the legacy—and the atmosphere—of a studio where everyone from Aretha to the Stones had done time.

Ultimately, though, their music evolves out of a somewhat mysterious inner space they’re able to access wherever they go. As Auerbach puts it, “I think that whenever you go some place that has a lot of rich history, you always kind of get a good feeling and that was definitely there for us. We got what we needed out of that room.  But I sort of feel that Pat and I can do it anywhere; it’s not dependent on where we are. We’ve been playing together for so long, honestly, we don’t need windows, we don’t need to see a beach or a city. It’s like when we’re working, we work for 12 or 13 hours straight and never go outside. We just get so focused.”

In addition to engineer/producer Mark Neill’s recording gear, the pair brought a lot of Auerbach’s vintage gear from Easy Eye Sound System, where they’d earlier cut demo-style tracks for the album. So Akron was as essential to Brothers as Alabama; in fact, they liked the demos for such tracks as “Unknown Brother” and “Black Mud” enough that, says Carney, “We ended up going back to those in January and finishing them up at Dan’s place.”

While they were in Alabama, there wasn’t much in the way of outside diversion between Muscle Shoals and their Marriott. After long days in the studio, they’d return to the hotel to try to unwind. And unwind, in their fashion, they did. Carney admits, laughing, “At some point we called our management at three in the morning and left a cryptic voice mail to, like, bring a harpsichord. I don’t even know if Dan realized we’d done that. But the next day our manager showed up from Nashville with the harpsichord and we had both spaced on what had happened.”

Along with the harpsichord, they utilized a Mellotron that Auerbach had purchased, ideal for adding subtle, ghostly, synth-like textures to these tracks. Auerbach himself experimented with his vocals, emboldened by his hip-hop colleagues: “I definitely was influenced doing that Blakroc record, seeing everyone really go for it. I’d never seen anyone else record that way. Someone like Mos or Raekwon, they can really get into character in front of the microphone. So I really went for it, too, and did all kinds of different shit, I used whatever range I had. I sang in a few different ways, but none that I thought wasn’t natural.” He employs a surprisingly silky falsetto on the one-take vocal of “Everlasting Light” as well as on “The Only One” and, overall, delivers some of the most soul-baring vocal performances of his career. He narrates a tale of jealousy and revenge on “Ten Cent Pistol;” draws from life on ” Unknown Brother,” written for his late brother-in-law; and mixes the real and imagined over the coolly evil vibe of “Sinister Kid.” As he explains, “Whether it’s a made-up story or not, it all felt very personal to me.” The pair also takes a sweet turn on a cover of Jerry Butler’s “Never Gonna Give You Up” before closing the set with the melancholy ballad, “These Days.” Jokes Auerbach, “We like to go out with a teardrop. Leave ‘em crying.”

Brothers is more stripped down than Attack & Release, the 2008 album they cut mostly in a vintage studio outside Cleveland with producer Danger Mouse and several guest players. Danger Mouse returned to produce “Tighten Up,” but there are no additional musicians, save for Atlanta-based R&B belter Nicole Wray, a former Missy Elliot protégé who contributes backing vocals to “Everlasting Light,” “Next Girl,” and “Howlin’ For You.” Yet the sound of Brothers feels like another huge step forward. The Black Keys rely on less yet ingeniously achieve more.

Grammy Award–winning engineer-auteur Tchad Blake mixed the album and totally got the concept. Auerbach describes him as “a genius with audio, a complete wizard, because we recorded these songs in a really minimal way. There are no more than 11 or 12 tracks on one song. All the drums are on one or two tracks, which is sort of unheard of in the modern-day recording world. Tchad does a lot of mixing where I’m sure he gets, you know, 40 or 50 tracks on one song. So he was really excited about our record, he would call us up and just tell us how much fun it is to mix this stuff because it was so raw.” For Carney, as he told Rolling Stone, bringing in Blake at the end underscored the attitude and the aim of Brothers: “He approaches mixing in the same way we approach making music. Respecting the past while being in the present.”

All Songs Written by The Black Keys, Except “Never Gonna Give You Up,” by Jerry Butler, Kenneth Gamble and Leon Huff 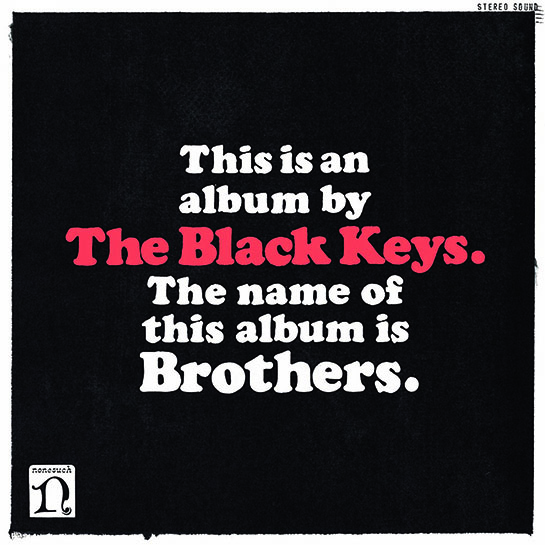