With its multi-layered structures, highly dramatic forms, and sheer volume, De Staat (text from Plato’s The Republic) suggests the bright, clangorous Balinese gamelan and the polyphonies of Stravinsky’s Les Noces. Andriessen considers this loud and aggressive work, dubbed "a Minimalist classic" by the New York Times, his “essay” on the concept of music, democracy and the state.

A classic of European minimalism, Louis Andriessen’s De Staat opened a new association between this Dutch artist and Nonesuch Records. Conductor Reinbert De Leeuw leads the Amsterdam-based Schoenberg Ensemble in a performance of the 35-minute work, which was recorded in one take following a live performance in a Louis Andriessen / Steve Reich festival held in Amsterdam.

Andriessen wrote De Staat between 1973 and 1976; it was premiered in Amsterdam by the Netherlands Wind Ensemble in 1976, and the following year was awarded the first prize at UNESCOs International Rostrum of Composers. Edo De Waart led the U.S. premiere of De Staat with the San Francisco Symphony in 1983; it has since been performed at the Los Angeles Philharmonic Institute (‘84); Cal Arts (‘85); and as part of the New York Philharmonic’s “Horizons” Festival (‘86).

De Staat takes its text from Plato’s The Republic; in it, Plato argues that “any alteration in the modes of music is always followed by alteration in the most fundamental laws of the state.” While Andriessen disagrees, he is nonetheless interested in dealing with the political nature of music insofar as it concerns who the musicians are and what notes they have to play. Most particularly in De Staat, the unusual scoring requires that free-lance musicians be used; also, Andriessen employs a “hocketing” technique, in which the ensemble is divided into different groups, each providing “equality of possibilities for everyone.”

With its multi-layered structures, highly dramatic forms, and sheer volume, De Staat suggests the bright, clangorous continua of Balinese gamelan as well as the brittle, motoric polyphonies of Stravinsky’s Les Noces. Loud and aggressive, Andriessen considers the work his “essay” on the concept of music, democracy and the state. 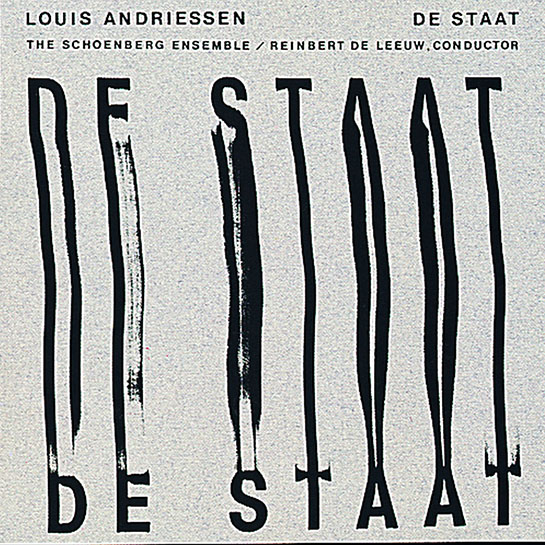